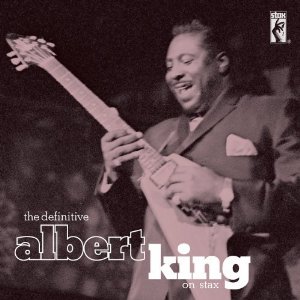 Albert King is (or was) The Man. Even rock fans who’ve never heard (or actively listened for) King will find his music oddly familiar. And the reason for that is simple: Albert King cast a huge and influential shadow over the careers of many of rock’s finest guitarists.

The left-handed axeman’s heyday largely coincided with his time on legendary Stax Records. And thanks to the archive-minded folks who run the label that now controls the Stax catalog, the latest in Concord’s Definitive series is a 2cd collection of Albert King sides.

The set kicks off with a a pre-Stax 1961 single featuring Ike Turner on piano. (Not to go too far off-topic, but Tuner’s failures as a man and husband have unfortunately led some to ignore his serious contributions to music. Just sayin’.) Even in ’61 King played in a modern style; his music still sounds fresh – hardly dated at all – a half-century later.

Most of the remaining tracks on the first disc feature King backed by the peerless team of Steve Cropper (guitar), Donald “Duck” Dunn (bass), Al Jackson, Jr. (drums) and Booker T. Jones (keyboards). Yes, Stax’s celebrated house band The MGs ably backed King through most of the latter half of the 1960s.

King’s influence extended far and wide. British blues revivalists had a special affection for the man and his music: His 1966 single “Oh!” Pretty Woman” (not the Roy Orbison song) was covered on an early John Mayall album. And Eric Clapton made many visits to the Albert King well of inspiration; he’d cover several of King’s songs. Perhaps most notable among those is Cream’s “Born Under a Bad Sign.”  Cream covered the song shortly after King released his own version. Both are essential.

King was celebrated in his home country, too. Stevie Ray Vaughan covered “The Sky is Crying (an Elmore James song recorded by King in 1970), and a posthumous SRV compilation took its title from the song. (Stevie and Albert played together on television once, too; that performance is reviewed here.)

One need not be a hardcore blues aficionado to enjoy and appreciate Albert King. His innately rocking sensibility – achieved effortlessly and without artifice – is such that he’s an ideal entry point into blues. His electric guitar is always out front in his songs, but there was always plenty-else going on as well. Sometimes King relates stories in a sung/spoken manner; witness “(I Love) Lucy” from 1968. Other times he lets his guitar do most of the talking (as on 1967’s “Cold Feet.” And beefy yet sympathetic backing from the MGs – and, as the sixties progress, the Memphis Horns as well — makes good songs even better.

King was a capable composer, but his strengths were such that he made others’ work his own. Whether he was recording a number from the Stax house writers, a blues chestnut (Howlin Wolf’s “Killing Floor”), or covering a rock song (“Hound Dog” or the Rolling Stones’ “Honky Tonk Woman” he put his indelible stamp on the music.

By the early 70s (the period covered on the second disc of The Definitive Albert King on Stax) King had switched to using, variously, the Muscle Shoals rhythm section, labelmates The Bar-Kays, and/or Isaac Hayes’ Movement. All cold be counted on to deliver the goods for King.

King managed the deft trick of establishing a distinctive style that still allowed him the freedom to create widely varying music. “She Caught the Katy and Left Me a Mule to Ride” is soulful rock as much as it’s blues. On the John Mayall-produced “Tell Me What True Love Is,” King plays atop an oddly skeletal big-band jazz arrangement; while it’s not among his most deathless performances, it remains – like all of King’s work – worth a listen. His excellent ’72 LP I’ll Play the Blues for You is represented on the Definitive set by no less than four cuts.

A track from the Wattstax soundtrack (“Match Box Blues”) shows that King could — and did — tear it up onstage as well; here he plays with more distortion than was often heard on his studio sides.

But while King applied himself to a number of styles, funk is the genre that King most successfully assimilated into his style in the 70s. The 1972 single “Angel of Mercy” weds King’s style to a thrilling arrangement highlighted by horns and electric piano. He makes the point explicitly on “I Wanna Get Funky,” employing production and arrangement styles of Isaac Hayes (though Hayes himself is not present). “Playing on Me” shows that King could adapt to subtly changing commercial trends without selling out his style. Even with wah-wah guitars and backing vocals from the ultrafunky Hot Buttered Soul gals, King is still Albert King.

A 1974 remake of “Crosscut Saw” is a gutsy reinvention of the song; it bridges the gap between straight-ahead electric blues and deep-fried 70s funk. Less successful but a charming oddity is a 1975 single — complete with sleighbells —  “Santa Claus Wants Some Lovin’.” A track from his Funky London LP “Driving Wheel” is a typically ace performance marred slightly by thin production. “I’m Doing Fine” from King’s deleted 1977 colleciton The Pinch is an oddity: his guitar is de-emphasized in favor of a soul arrangement. But it too is worthwhile, even though his voice has that fell-down-a-well effect applied.

In a manner similar to the way that Disc One opened with a pre-Stax side, the 2CD set closes with a 1984 number from one of King’s last albums. It’s a reading of Elmore James’ “Dust My Broom” from I’m in a Phone Booth, Baby. Like much of what came out of the blues in the 1980s, the arrangement is hopelessly dated, with a particularly brittle piano part typical of the mid 80s and sax by way of the bland Billy Joel school of ersatz genre-fication. But even in the face of anonymous backing, King is – yet again and always — still King.