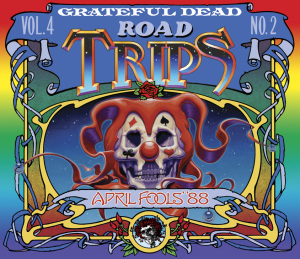 Some context is necessary before diving into this one. In 1989 my dear sister purchased a pair of concert tickets for me and my then-new wife. The tickets were to a show by the Grateful Dead. Having never seen the band in concert before, I was quite excited at the prospect of attending what I assumed would be an Event.

I was pretty familiar with the band’s work. I already had a tidy if small stack of Dead LPs. Moreover, I knew enough about the band’s live reputation that I wouldn’t go expecting to hear “Truckin’.” I was prepared for the fact that onstage the group would perform long versions of songs from their already-vast catalog, and that the show would be lengthy. I also expected there would be drug use by some of my fellow concertgoers at Atlanta’s Omni.

I didn’t expect the Event to start as soon as it did, however. When we boarded a commuter train for the ride downtown (then as now, parking was both a challenge and expensive) we were enthusiastically greeted by the passenger in the seat directly in front of us. “Going to the show?” he asked? Yes, we replied, taking silent notice of the bright blue streaks covering one side of his face. We also noticed the box on his lap. A cardboard box with the four flaps folded inside against the inner walls, it was filled with several colors of brightly colored aerosol paint cans.

Being the friendly sort, he kindly offered me and my new wife access to the box: “Want a huff?” he asked. And I’m sure he meant “for free,” ‘cause, y’know, that’s how Dead fans are.

We politely declined his offer, along with those put forth by many other herbulent concertgoers we would meet during our adventure. But at the show itself, we were dismayed to learn that while yes the band would in fact play for three-plus hours, no they would not stop a single time to speak to the gathered unwashed.

What’s more, not only did they not play “Truckin’,” they also did not play a single song from any of the dozen or so records I had at home*. During the course of the evening they did, however, play one single solitary song I had heard before. But it was a cover: Bob Dylan’s “Stuck Inside of Mobile With the Memphis Blues Again.” Other than that, it was three-plus hours of unimpressive stuff I had never heard, and wouldn’t remember in any meaningful way afterwards.

I left the concert convinced I had just attended the most boring concert of my life. Some twenty-odd years (and innumerable shows) later, that record hasn’t been broken. And I suspect it never will be.

So, gentle reader, it’s against that backdrop, with that baggage, that I agreed to listen to the ominously-titled Road Trips Vol. 4, No. 2: April Fools. It’s a three-CD set documenting the Grateful Dead’s performance at New Jersey’s Brendan Byrne Arena.

As I popped the first disc into my CD player, I wondered a bit: Why release a Grateful Dead concert from late in their career? Why, in fact, release any live discs of them at all? The Dead all but invented the taper-friendly aesthetic, and tapes of damn near every of the eleventy-bajillion shows they ever did circulate among the faithful. (And no, I have never sought out a copy of the ’89 show I attended.) No matter, I said to myself. Here it is, and let’s listen.

Listen I did. And a few surprises – all pleasant — were in store. First, the song selection was ace. Songs familiar (both by title and arrangement) to fans of earlier Dead live albums like Europe ’72 are here in ample quantity. And there are no covers of Buddy Holly** or Chuck Berry. (Ages ago, Rolling Stone famously called the Grateful Dead the worst-ever interpreters of one of those artists’ material; I forget which one. It’s true for both.) And most surprising to this listener, the band actually sounds interested in what they’re doing.

A bit less surprisingly, the sound quality is phenomenal. This, despite a caveat on the back of the (very nice) package citing “occasional technical anomalies and unavoidable ravages of time.” And the energy level (onstage, at least) never rises to anything like a fever pitch. But it certainly beats the time I saw them when – if I recall correctly — they played mostly seated.

Since April Fools is an audio-only set, listeners will be left to ponder a minor mystery: Why does the audience erupt into loud cheers at certain points — again and again —  thoughout the set? That wasn’t exactly a guitar solo I just heard; it was more like “playing.” (Detractors would call it “noodling,” but I’m trying not to go there in this review.)

Collectors of unreleased material will be familiar with the “>” symbol; noted on track lists, it’s way of indicating that the performance segues straight from one song into the next. Deadheads need lots and lots of these symbols for track lists of their heroes’ shows. And April Fools is no exception; the songs tumble into one another.

The playing is loose-limbed but assured. The thing about the Grateful Dead is that you can’t really ever know if any given lick was a mistake or if that’s how it was meant to be played. More often than not, Bob Weir is in fine voice, but occasionally he goes overboard and sings really terribly. Witness “All Along the Watchtower” on disc two for just such an instance.

But Weir at his vocal worst is still miles above Jerry Garcia, a man who (by the late 80s for sure, and arguably much earlier) should have never been let anywhere near a vocal mic. People talk about how Bob Dylan’s songs are often more palatable when sung by others. I believe with all my heart that those people haven’t listened to Jerry Garcia butcher “Knockin’ On Heaven’s Door” (to name one of way too many on this set).

If you love the Grateful Dead, this set is a worthwhile addition to your collection. If you don’t dig ‘em, the nearly four hours of uninterrupted music on Road Trips Vol. 4, No. 2: April Fools will be a mighty test of your endurance. As someone in the middle of those two extremes, my opinion is also midway between. Musically it’s good if wholly unexciting. It’s infinitely better than the show I witnessed about a year later, and has caused me to revise (a bit) my assessment of the group’s late 80s work. The “Space” tracks (a catchall term applied to those parts of the show when the group’s playing least resembles actual music and most resembles the musical equivalent of – dare I say it –masturbation) are kept to a relative minimum, and the song quotient is fairly high. As a document of what the band sounded like in those days, you can (as I did that fateful night) do much, much, much worse.

* Turns out they did do one or two, but the versions were so anemic they made no impression on me.

** Yeah, well, not being able to leave well enough alone, they encored with “Not Fade Away.” Oh, well.