A Conversation with The Church’s Steve Kilbey (part two)

Continued from the previous post, here’s part two of my conversation with The Church’s Steve Kilbey. All photos © Bill Kopp. — bk

Bill Kopp: Your band The Church has gone in a number of different directions over the years; in addition to acoustic renderings of your songs, album-long improvisations like “Bastard Universe,” the covers album A Box of Birds. In all of these cases I get the sense that the band heads down these paths not to pander to any sort of fan demand, but rather because you simply find it interesting to do so. Is that an accurate observation?

Steve Kilbey: Absolutely. We’re a rock band; we’re a curious band. We love the past: we love the Beatles, the Rolling Stones and Dylan and David Bowie and Marc Bolan and all the rest of ‘em. But we also love to jam, we love short songs, we love Pink Floyd, we love some electronic music. We love folk music, we love the Byrds. So we love everything, and everything’s in there. Peter is a huge Jimi Hendrix fan. He loves the blues, and he loves classic pop songs and the chord progressions in them. Marty loves prog rock! He loves Yes, Genesis and all that stuff. He [laughs] likes songs that are forty minutes long in 9/8 time. And then there’s Tim [Powles]; he’s a drummer, so he’s weird again. He looks at things from the point of view of time. But he’s also a producer, so he likes interesting, unusual qualities in his music that no one would ever think of. And then you’ve got me and all the things I like. 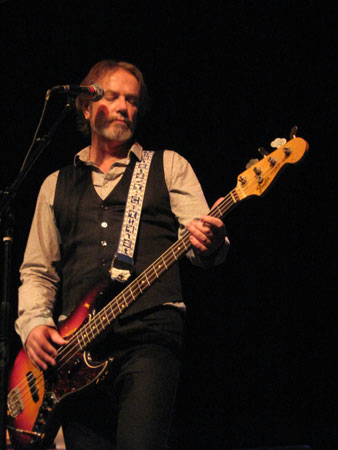 So you throw all of us in together, and we still have a huge enthusiasm for rock music and all that came after The Beatles. And we’ve got an endless recipe for doing odd things. Totally commercial three-minute things to long, rolling, messy epics. Covering other people’s songs, and having people cover our songs. Everything we can possibly do within this format, we will want to do.

BK: On a personal note, I’ve got between eight and nine thousand albums…

SK: Wow. A maniac! You’re an obsessive man. Oh, my god. Why didn’t they warn me?

BK: …and over the years there have only been two or three albums that I have bought on vinyl and cassette and compact disc. Gold Afternoon Fix is one of those.

SK: Oh, my god. That’s the album that I…this is interesting. Now, you’re not going to take offense to this, because you’re an intelligent man. That is my least favorite Church album of all Church albums.

SK: I think it’s a classic case. We had made this album Starfish, and it was a big success. We had been struggling up to that point, and our struggle had brought cohesion to the band. We had incredible cohesion between us because we were struggling against failure. Suddenly we were successful. We were like that wrestler who’s got his opponent down on the mat; the opponent’s just lying there. Some of the crowd are cheering, and some are jeering. So he stands up and he walks around showing off his muscles and stuff. Suddenly when he turns ‘round to deliver the killer blow, the opponent has stood up and turned into grunge rock! And completely wiped him out. That’s what happened with us. 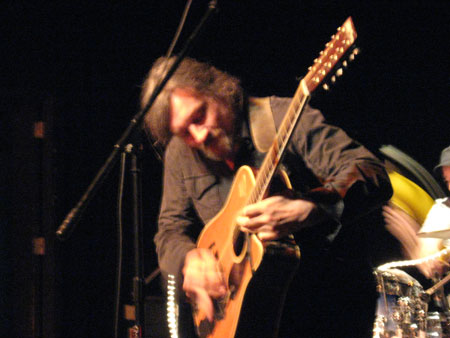 That album…to suddenly be quite successful, we very temporarily lost our mojo, I reckon. I mean, other members of the band will say, “Oh, no; that’s a great album. I don’t know why he doesn’t like it; some great fucking songs on there.” But to me, at the very best it was treading water.

I mean, this is the thing: The Church are a great band, and I am a great lyricist. Even on a very mediocre day, we will do something pretty good. We never sink below a certain standard. And Gold Afternoon Fix is an example of that: it did not sink below a certain standard. There are some good songs on there, there are some tricky chord progressions, there are some interesting guitar flourishes and neat lyrics. Some good effects. But overall, it’s a disappointment. It should have been our killer blow; we should have turned around and fucking nailed the world, nailed America with the absolute epitome of all that we were good at. And instead we just kind of came out with that. We needed to drum up something extraordinary, and we drummed up something that was kind of, “yeah, alright.” There are people who really do love it. There are people for whom that was exactly what they wanted. I don’t deny them that, and I’m really happy that people like anything I do. But certainly – to me – it’s our most disappointing album.

BK: From a fan’s standpoint, sometimes it has to do with when the music hits them in their particular lives.

BK: Perhaps coincidentally, and perhaps not, there’s song on the album called “Disappointment.”

SK: Yes, there is. Strangely enough, a lot of Americans would find it hard to understand when I would say this, but my specialty is writing songs about disappointment and disillusionment. Not depressive subjects; not the sorts of things that make you go cut your veins open. Not stuff about the devil, and killing your mother and father. More about that idea John Lennon flirted with, that feeling of – how I’ve often felt – being slightly estranged from this world, of suddenly finding myself alone somewhere. And it’s not entirely unpleasant. 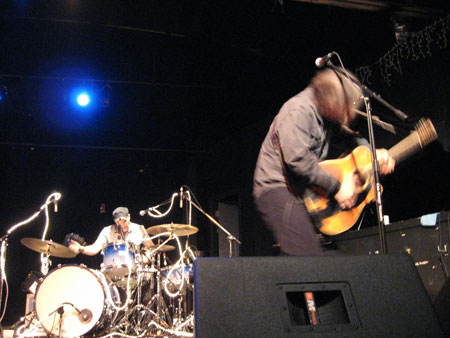 That is one thing about Gold Afternoon Fix; it did have some subtle emotions on there. A song like “City,” when it’s over, it’s like, was the guy happy about all that or was he kind of detached? Like John Lennon in “Strawberry Fields Forever.”  At the end of the whole song, you get this feeling of incredible, weary detachment.

SK: And nobody up to then — as far as I knew — wrote songs about weary detachment. That wasn’t the sort of something that anybody had tried to consider. And in the spirit of that, each Church song describes some sort of subtle feeling. And Gold Afternoon Fix is very much like that; it’s a very subtle album. It’s hard to say what mood you’ll be left in when it’s over. So in that way, you could revisit it a lot, and listen to it; you’re never quite sure. When I think about it, the albums that I love always leave me feeling not-quite-sure. “I think I’ll have to listen to that again!” And some albums, I’ve been doing that for forty years. Sticking it on again just to try and find exactly what’s going on. 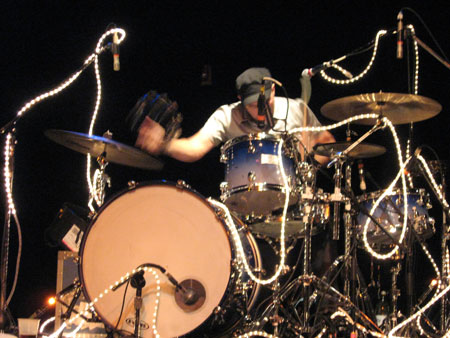 BK: Those records continue to reveal their charms on repeated listening. The best work that The Church has done is especially effective at setting a mood, of being especially evocative of a particular feel, whatever that feel happens to be. Even though the songs are varied in lyrical content, arrangement and whatnot, on each album they all seem to hang together in a cohesive way, rather than being merely a collection of the last dozen songs you guys wrote. Is that sort of hanging-together concept something that’s important and worked at, or is it simply a happy coincidence?

SK: It’s a happy coincidence. What happens is this: imagine you’ve got four craftsmen. They’re going to make a box with ten pieces in it. Their raw material arrives, and they have twenty or thirty pieces; they keep working and working and working. Eventually they have ten pieces. And because they’re such good craftsmen — they’ve been around for more than thirty years, so they know what they’re doing – eventually they polish these ten pieces, and chuck them in the box in some fairly random order. But when the customer arrives and opens the box, he’s quite delighted. Because by that stage the pieces will make some kind of sense. That’s the nature of it, and it’s also the kind of ambiguity that’s sort of built into the whole thing.

There is no — and there never has been a – guiding master plan, a vision for the whole thing on an album. It’s always been, take out a sketch pad, scribble scribble scribble, and eventually the outline of a horse starts to appear. And eventually you go, “Okay, I’ll go with that.” And you start working on a horse. That’s what The Church has always done, in musical terms. 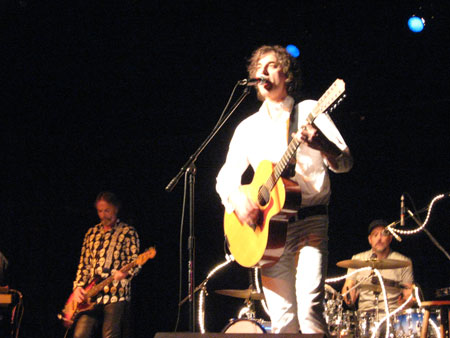 BK: For the dates on this tour, you’ve announced ahead of time exactly what the set list will be: first, Untitled #23, then Priest = Aura, then Starfish…

SK: The acoustic show is not the “three albums” show. I hope people realize that. For some reason – some economic reason – we couldn’t bring the three-album show to Greenville. We don’t have time to reinterpret — we couldn’t possibly – all those songs. So what we’re actually playing – and gee, I hope I’m not going to put anybody off – we’re doing our “An Intimate Space” show. It’s a show we’re doing in America and Australia this year. We’re working backwards from our latest album, one song off each album through to our very first album, which is where we’re going to stop. That one’s a tried-and-true success; everybody likes that show. There was some problem with Greenville, getting the equipment there, or from that show to the next, or something like that. I’m not sure what it was, but there was some reason we couldn’t do the electric show. But somebody said “We could do the acoustic show.” So we’ll go forward through the past to our first album. 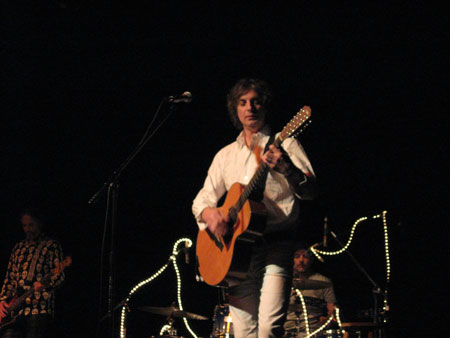 BK: On these other dates, when you do the three album set, does that sort of take the mystery out of things, making the evening somehow predictable? Or will you somehow work some surprises into the mix?

SK: I am going to be struggling so hard to play all these songs, it will be a mystery if I can get through it or not! And the surprise will be if I actually do. I’ve got to deal with being able to do it, first. I reckon the songs will provide plenty of surprises. I can feel it happening at rehearsal.

BK: The band has been together for more than thirty years.  The string of albums The Church has released over the last decade — whether reinterpreting older material or serving up new songs — they’ve gotten strongly positive reviews. After this tour, what’s next for the band?

SK: We’re doing the Sydney Opera House with a symphony orchestra. We’ll film and record it for possible release; it’s going to be a documentary. But after that, I don’t know. Because there’s not really much you can do after something like that, except maybe landing on the moon!