Yoko Ono is Not a Witch.

Today is Yoko Ono’s 78th birthday. Here’s a feature/interview of mine from four years ago, around the time Yes, I’m a Witch was released.– bk

No, she’s not a witch. Not at all. In fact, this writer found Yoko Ono to be a most diplomatic, self-deprecating interview subject. She made a genuine effort to use my name when speaking to me (a sign of respect one rarely finds in understandably busy and weary performers) and offered thoughtful, considered answers to my wide-ranging questions. Though her publicist granted me a mere fifteen minutes, we covered a lot of ground. Even when she deflected a question, she did so in such a gracious way, I didn’t notice until it was too late.

Yoko’s new album is a collaboration of sorts. The publicity info for Yes, I’m a Witch states, “each artist was given her catalog to listen to, and upon sele 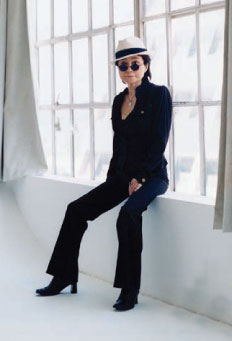 cting a cut, was provided with the vocals and whatever other instrumental elements attracted them from that cut. Almost all the artists chose just the vocals.” I probed the “almost” part of that quote, and Yoko explained that, in fact, none of the instrumental tracks were used. It seems they were gently encouraged not to use them.

In the book The Art and Music of John Lennon author John Robertson makes the assertion that John Lennon did some of his fiercest, most innovative guitar playing on Yoko’s albums. The idea is that to some degree he felt freed from the responsibilities of being the “front man” and relished the idea of concentrating on his instrument. Yoko agreed that this assessment was on the mark but disappointed this Lennon fan by admitting that none of the artists used any of John’s guitar playing on the album.

A second, thematically similar volume of vintage-Yoko-meets-today tracks is slated for release this fall. I asked for details on that, and Yoko replied diplomatically that she does “not comment on future projects.” The Yes, I’m a Witch project is quite similar in concept and execution to Todd Rundgren‘s Reconstructed album, but Yoko’s project is much more successful. In part this may have to do with the selection of artists involved in the project; the list reads like a who’s-who of 21st century cutting-edge music: Peaches, The Flaming Lips, DJ Spooky, Porcupine Tree, The Polyphonic Spree, The Apples In Stereo and Cat Power…and that’s less than half of the artists involved.

In a famous quote, John Lennon asserted that “‘Don’t Worry Kyoko (Mummy’s Only Looking for a Hand in the Snow)’ is one of the best fuckin’ rock n’ roll records ever made!” Now, nearly 40 years later, I asked her what she thought of that quote. Though fiercely proud of John, she seemed a bit embarrassed to admit that she thought he was right.

So why didn’t anyone cover it for this album? In fact, most of the songs selected for Yes, I’m a Witch date from Yoko’s post-Apple days. The songs selected arguably draw upon her more–dare I say it–accessible and conventional work, bypassing the more avant-garde offerings of the early 70s. I asked Yoko if perhaps her earlier work remains too difficult for artists to get a handle on. She chuckled at the “accessible and conventional” reference–those aren’t words often used to describe Yoko’s music–but didn’t express an opinion as to why those Apple-era works weren’t given the treatment. The possibility does remain that we’ll get to hear some of those on the next volume; Yoko wouldn’t comment.

I was able to coax some enticing thoughts on the future from Ms. Ono, however. John’s Anthology box–lovingly compiled by Yoko–came out almost a decade ago. But there are hours and hours of quality unreleased material remaining unreleased. So I asked: are there plans to continue archival releases, or will fans be forced to chase after bootlegs? Yoko talked first about the effort and expense in putting together such a collection, and then made the case that Anthology was a good, representative collection of John’s unreleased work. 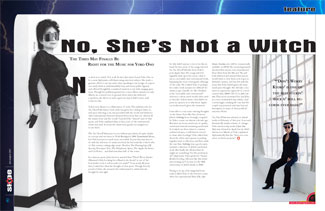 But finally she allowed that we might see something “for the professionals” (diplomatic Yoko-speak for fanatic Beatles bootleg collectors like this writer) in time for the 30th anniversary of John’s death, in 2010.

Since Yoko is a visual and conceptual artist in addition to her musical work, one might’ve expected a visual companion piece to Yes, I’m a Witch. Yoko chose not to do one, the idea being that the focus should remain squarely on what the new artists are bringing musically to the table.

Trying to hit a few tangential loose ends, I asked Yoko if she foresees a time when her experimental films (Fly, Apotheosis, Erection, etc.) will be commercially available on DVD. She seemed genuinely shocked that anyone even remembered these films from the 60s and 70s, and both flattered and amused that anyone would want to view them now. I got no definitive answer, and was left with the sense that Yoko hadn’t given the issue much prior thought. She did take a moment to express her approval of a more current film, 2006’s The US vs. John Lennon. That movie portrayed her and John in a very evenhanded way, subtly–and convincingly–making the case that the couple was prescient and wise beyond description in many of their political efforts.