Trey Gunn is renowned in progressive and avant garde music circles for his technique, expression and boundary-pushing sense of musical adventure. Gunn has worked with (and provided his singular talents to) a wide variety of musical artists; the most high-profile of these would undoubtedly be King Crimson. He played “touch guitar” on record and stage with the group from 1994 to 2003. His most recent project (one of many) is the new compilation I’ll Tell What I Saw. I had a few questions for him concerning this unusual compilation. – bk.

Bill Kopp: While there’s a sort of sonic thread running through the various pieces compiled on I’ll Tell What I Saw, it’s really widely varying music. 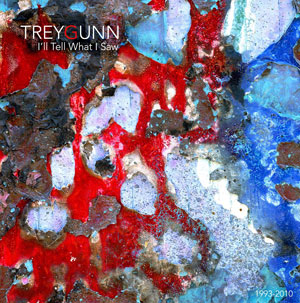 Trey Gunn: Specific to this recording, it didn’t start out the way it ended up. Which is often the case: you have an idea, and follow it along. And in the course of following it, something else explodes along the way. Which is the reason why you just need to be working! You need to practice, to play, to be onstage doing it, and just be aware of what’s happening.

Originally the project was just going to be a promotional CD for Voiceprint, my label in Europe. They were going to put out our or five of my records, and they wanted a promotional compilation. I’ve only ever done one [compilation] before, and it’s a little tricky for me. Because I make each record as a kind of self-contained thing. So I thought, “Okay, you’re going to put out my records, so I’ll give it a shot.” And then they said, “Give us two discs if you want.” I thought, two discs is way too much!

So I started messing around on one, and I realized that I have so many different projects that putting them together is quite a potpourri. I started thinking, “This is turning out kinda cool.” I had this track that I recorded with Inna Zhelannaya, the Russian singer, and I thought, “Maybe she’ll let me put that on.” So my circle started widening. I realized, “Hey, I played on this guy’s record; I wonder if he’d let me add a track.” The thing started to grow. So I called Rob at Voiceprint and said, “This is turning into something pretty cool, something bigger than a promotional disc. I don’t want to do all this work and then just give it away! I’d like to take it further.” We decided it might be two CDs.

So I got about two-thirds of the material together, and then I widened my circle again. I asked myself, “Are there any projects that I’ve played on but haven’t thought of?” I went through my CD collection and found more and more stuff. I contacted everyone involved and told them, “Hey, look. There’s really no money involved here, but it’s a great opportunity for all of us.” Most of the records aren’t available in America, and some not even in Europe. So I pulled the whole thing together, and it ended up being so much cooler than some sort of Trey Gunn’s Greatest Hits kind of thing.

BK: If you had to distill it, define it, what would you say it is that attracts you to a potential project?

BK: Most of the music on this set is instrumental. That makes me curious about your concept of the voice. Do you think of the human voice as, in a matter of speaking, just another instrument? 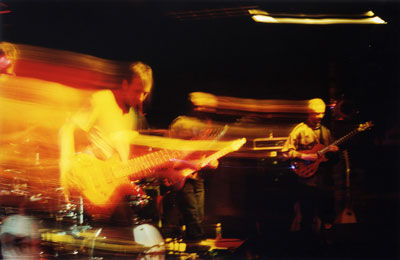 TG: For me, it’s not just another instrument. It kind of is halfway, but it’s not. The human voice is so expressive, so unique. The voice is so unique to the person, where instruments are not. There are unique musicians. I can pretty much hear one, maybe two notes from Bill Frisell, and I know it’s him. (I used to be able to do that with Jeff Beck, but now there are so many people who copy him. Of course when you hear the real Jeff Beck, it’s like, “Oh, that’s the real Jeff Beck.”) But nobody touches the instrument like Bill Frisell for me.

Over the last ten years or so, I took on the challenge of writing instrumental music. And it’s a real challenge. For me it’s kind of a puzzle: how do you do instrumental music that’s not just doing the genres that are already done? And I know a lot of players who think like that; it’s almost the question of the age. I try to do it without using the jazz model, where there’s a head and a solo.

BK: In terms of sequencing, the two CDs jump all over the place chronologically and by artist. What factors did you take into consideration when deciding how to sequence the tracks?

TG: The sequencing is really challenging, and it’s really important to me. I realize that absolutely irrelevant to Ipod culture – I don’t listen to records like that on my Ipod; I put it on random mode, and I even put records into random mode because I like being surprised – finding the right sequence is critical to me. And because it’s two discs, I wanted it to flow. I think making a record is a lot like making a film in that way. Certain things set up other things, and other things are needed to close something. 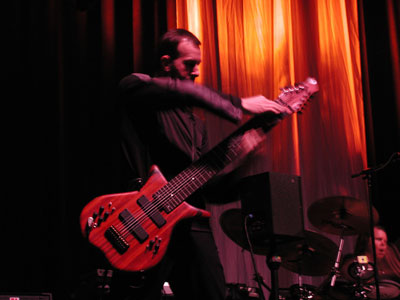 BK: There are plenty of tracks from your solo works, from collaborative ventures like the Marco Minnemann drum solo project Modulator, and what I suppose we could call “guest spots.” But nothing from King Crimson or any of the ProjeKcts with which you were involved. Was that down to licensing or some other reason?

TG: It didn’t even enter my mind. To get permission is complicated. And it’s a different thing: as soon as you put King Crimson on there, the name – or the brand – kind of overshadows things a bit. It’s almost like a selling tool. And it doesn’t need to be on there, because there’s so much King Crimson material out there that you can’t get away from it. All it would be doing would be attaching me to that music, which I’m already attached to. And I didn’t need it!

BK: It’s not like you didn’t have enough material. And it also might have given the CD the whiff of a spinoff project, which is not what it is at all.

TG: For me, in my musical life, the Crimson stuff is sort of hermetically sealed in its own world. And I’m happy for it to be like that. It’s a separate thing.

Now, I could see making a compilation of King Crimson stuff that I played on, but – my god — there’s plenty of Crimson stuff out there already. Who needs that, unless you’re introducing it to a new audience?

BK: Yeah. It would be An Even-younger Person’s Guide to King Crimson or something like that.