CD Review: Let Me Tell You About the Blues / Nashville 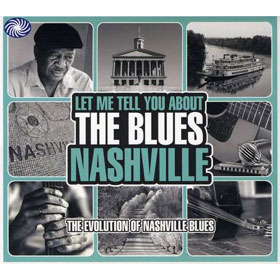 The liner notes come right out and address the argument some might raise against this package. Thought it’s titled Let Me Tell About the Blues: Nashville, most people will agree that blues is not the first (or second) genre that springs to mind when one thinks of Music City.

But as the liners make clear, in the 1940s and ‘50s, quite a number of Nashville-based labels turned out blues. And is so often the case, leave it to our friends across the Atlantic to recognize and compile this sort of thing for us.

There’s a long and proud (or embarrassing, if you’re American) history of U.S. artists having to go the Europe to establish the careers. Jimi Hendrix and the Ramones are among the most celebrated examples. And actor Jerry Lewis aside, we have the French (among others) to thank for recognizing a lot of otherwise-ignored American jazz. The British blues boom of the 1960s gave a second chance to a long line of underappreciated American blues artists.

So with that in mind it’s less than shocking that UK-based label Fantastic Voyage has collected 75 blues sides from those Nashville labels. In doing so, they’ve brought together a lot of music that would otherwise require a good bit of detective work to hear. While there are a couple of relatively well-known artists (Cecil Gant, Wynonie Harris), the bulk of the music on these three CDs is from unheralded artists performing mostly-unheard music.

The sonic quality is good considering the source and age of the material. And for listeners who like blues and early R&B but who are not well-versed in its history, this set will often sound like a collection of songs that might have been hits. (They mostly weren’t.) There’s some deep connective history here, including “Beer Bottle Boogie” by Rufus Thomas(!) conducting business under the pseudonym Mr. Swing.

In fact the blues tag is a slight misnomer, as a good deal of the music on this set leans toward R&B, but that only makes the collection more varied and interesting. Annotation by Neil Slaven (not included on this reviewer’s copy) reportedly provides history and context for the music contained on the discs.