Album Review: We Landed on the Moon! – This Will Be One for the Books 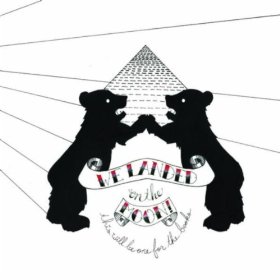 I’m not sure what it is, exactly, but for some reason, albums by a few quality bands with female lead singers seem to be finding their way onto my desk in recent months. The latest is This Will Be One for the Books by We Landed on the Moon! And though both the band name and the album title are wordy mouthfuls, their music is exactly the opposite.

Across eleven songs, WLOTM! (sorry for the unpronounceable acronym; were I being paid by the word, I’d spell it out each time) crafts a spiky yet tuneful musical concoction. “The Good Fight” — source of the lyrics that provide the album title — kicks things off with a propulsive, catchy riff, and Melissa Eccles‘ clear, piercing voice is out front where it belongs. “Across the Sun” is another catchy number, and it shares a compositional characteristic with the album’s opener: both have a mid-song breakdown where the tempo slows, the vibe lightens, and things go a bit dreamy. Then — on both songs — it’s back into to rocking. This shade-and-light approach gives the songs more texture than they’d otherwise have, and the approach probably serves WLOTM! well live onstage.

The rest of the band don’t seem to sing much, save for the occasion ooh or ahh, and WLOTM!’s production aesthetic mostly avoids vocal overdubs, so what you get on songs like “Blackout” is (again, probably) pretty close to what you’d get live: a rocking band and s single vocal line. But it’s enough. “Blackout” finds the guitarists playing short bursts of staccato riffage, atop which Eccles sings in a contrasting, mellifluous style. That contrast works. A (relatively speaking) longish instrumental break toward the end of the song introduces some vaguely Radiohead-like guitar textures.

“On Our Last Legs” fashions muted guitar riffs that sound like Police demos, but then the song kicks into high gear, amping up both tempo and volume. “Boats” starts out leaning a bit toward the cutesy kinds of sounds one might have expected from Melanie (Safka) some forty years ago, but then it too turns into more of a rock-oriented number. So while the songs each have their own lyrical focus and sound, arrangement-wise WLOTM! seems to approach the songs with a bit of an agenda: simply put, don’t play any song the same way all the way through. And that’s fine: they don’t overdo it, and the transitions work. This isn’t prog.

“Ships in Parts” is yet another catchy number, but a very (very) slight sameness begins to set in halfway through the album. Don’t get me wrong: the songs are catchy, but they don’t all have that stick-in-your-mind hook necessary to grab the listener by the figurative lapel. The songs do — just a little bit, mind you — begin to tumble into one another. That said, the tempo shifts in “Ship in Parts” sound like they’re done on the fly (i.e. not via studio editing/splicing), so this is one tight band.

“Run for Your Life” features a warbling, trilling guitar line. “Shapeshifter serves up a higher minor-chord quotient and a vaguely spooky/sinister vibe. “Song of Few Words” is truth in advertising, and oddly may be the best song on the album, with its jangle/crunch guitar textures. But it too trades in the let’s change-the-tempo-for-the-middle-eight style. What was a good idea on songs one through three is wearing out its welcome by song number nine.

“All the Little Lambs” introduces some elementary analog-sounding synth lines into the mix; it’s an intriguing development that largely fails to develop. Here Eccles tries for a harder-rocking Pat Benatar style, and while the band gets points for heading in a (marginally) different direction for once, the results aren’t as interesting musically. And that synthesizer: it just lies there, as if someone put a medical textbook on the sustain pedal and walked away. True, at the song’s end there are a few synth squiggles, but it’s too little too late when applied to the album’s weakest (and, not coincidentally, longest) number.

WLOTM! closes the record with “No Show,” a campfire-sounding number. Well, a campfire with Ric Ocasek; it sounds a bit like the Cars, unplugged. Utterly unlike the other songs on the album, this brief, fetching tune is the best song on the record, hands down. Which is cause for some confusion and consternation. Setting aside the final two tracks, you can pick pretty much any track on This Will Be One for the Books, and how you feel about it will be a surefire indicator of how you’ll react to the album as a whole. That’s the case for good or ill. If you dig it, fine: lots more where that came from. Expert playing, tight songs, lovely, controlled yet expressive vocals. But if you don’t care for it — or if you’re looking for some variety from song to song, you might not find This Will Be One for the Books a completely satisfying listening experience. Verdict: good, but perhaps a bit too much of a good thing.