Paul Myers‘ excellent book about Todd Rundgren‘s production work will hit the shelves soon (it’s reviewed here). here’s a look at the session tapes for one of the projects discussed in that book. 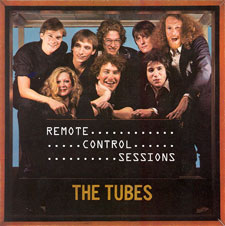 The year was 1979, a mere five years after The Tubes broke onto the scene with their hit, the satirical “White Punks on Dope.” They followed up the first album with two more–Young and Rich and Now–that expanded the approach, but sold in decreasing numbers. They reversed the commercial downtrend a bit with 1978’s powerful double-LP What Do You Want From Live, a document of their residency at London’s Hammersmith Odeon. Even without visuals, the album conveyed the madness and theatricality of a Tubes concert. The group had long been notorious for its borderline-softcore approach to stage shows, replete with writhing female dancers and suggestive, salacious lyrics. And while many missed the point–The Tubes were always about satire, about social commentary–even they had to admit it was one helluva show.

So in 1979 the group entered the studio with legendary auteur Todd Rundgren producing and engineering. Their planned album would be their most ambitious yet: Remote Control was to be a concept (or at least a thematically-linked) album about society’s fixation on television. They brought with them a strong set of tunes. Several numbers–“Turn Me On,” “TV is King” and “Prime Time” were clever and commercial all at once, and “Love’s a Mystery (I Don’t Understand)” can now be seen as a template for their 1981 power-ballad Top 40 hit “Don’t Want to Wait Anymore.”

As always, The Tubes paid close attention to creation of a total package. The album cover featured the “Vidtrainer,” a combination baby car seat/television, with a nipple on the screen. And the back cover featured the eight members of The Tubes posed on the signature set of the popular TV game show Hollywood Squares.

Though many concert recordings circulate, few Tubes session tapes have made their way into collectors’ circles. Remote Control Sessions is one of those few, and it’s an interesting document. This eight-song set includes five songs that would end up on the finished album, albeit with different vocal takes. The vocals on Remote Control Sessions feature different phrasing plus some alternate lyrics, and lack Rundgren’s distinctive overdubbed vocals.

Three songs on Remote Control Sessions didn’t make the cut on the final album. “Baby Let’s Run Away” features the vocals of Re Styles, most well-known for her, um, touching duet with Fee Waybill on the Young and Rich standout track “Don’t Touch Me There.” The unreleased “Baby Let’s Run Away” enjoys a Jack Nitzsche-style arrangement and would have sounded fine on the album. (It doesn’t flow with the TV concept, but then neither does “Mystery.” Never let a concept get in the way of a good song.) The other two numbers are untitled instrumentals. The shorter one features exotic synthesizer squawks, prominently showcasing the knob-twiddling of Mike Cotten. The other is a more conventional song with a funky melody atop a tricky time signature; the piano work of Vince Welnick (later of The Grateful Dead) is the focus of this piece.

The ambitious Remote Control was not a huge marketplace success, and A&M would reject a followup album and then drop The Tubes. But the band regrouped, signed with Capitol and went on to release the two most successful albums of their career. Their fortunes faded again in the mid 80s: they again teamed up with Rundgren for the disastrous Love Bomb; they got dropped by Capitol; lead singer Fee Waybill briefly left; and founder Bill Spooner cleaned up and went his own way. Four of The Tubes (with others) continue today, but there’s been little in the way of new music.

Knowingly or not, many of today’s theatrically-oriented acts owe a substantial debt to The Tubes. The group combined choreography, shock tactics, comedy, excellent musicianship and multi-part harmonies for some of the most enjoyable live shows ever. Mike Cotten is putting the finishing touches on a retrospective documentary film about the group (LINK NO LONGER VALID); perhaps its release will spur a re-examination of this intriguing group.