Renowned DJ Keb Darge built a name for himself in music without playing an instrument, writing songs or singing. First as a dancer, he gained notoriety in the clubs. Then he gained fame as a DJ and champion of what the British call “northern soul,” a scene that hybridized the style of the UK mod movement with a strong affinity for Motown and similar genres.

Darge was also instrumental in launching the careers of The New Mastersounds, and served as executive producer on that group’s debut. Not a knob-twiddling producer in the traditional sense of the word, Darge’s function was more as spiritual advisor. As Mastersounds guitarist Eddie Roberts told me, that mostly meant Darge would “[sit] in the control booth and [say], ‘Yeah! Just like that, only faster!'” 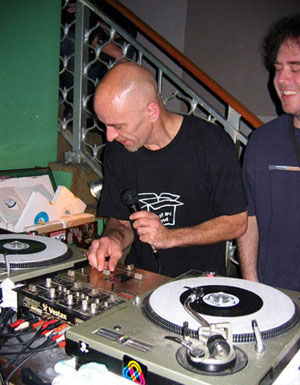 As a record collector and music historian of note, Darge developed a reputation for unearthing some amazing and heretofore lost/obscure sides for his DJ gig. With Darge working the board, dancers could count not only on a great beat and continuity for their recreation, but freedom from hearing (as the Four Tops sang) the “same old song.”

It was fairly logical, then that Darge would segue into his current role as curator of compilation CDs for the London-based BBE (“Barely Breaking Even”) label. For BBE, Darge has put together a dizzying array of compilations; a random selection of titles tells the story: Funk Spectrum III, Soul Spectrum II, and one I reviewed months ago, Lost & Found: Real R’n’B and Soul.

I spoke with Darge recently about his latest project, a 20-track disc billed as “a collection of ultra rare Black rockers from the 50s and early 60s” entitled Keb Darge and Little Edith’s Legendary Rockin’ R&B. Owing to an unfortunate combination of (a) a very dodgy phone connection and (b) over-optimism on my part with regard to my ability to understand English delivered with a thick Scottish brogue, I only ended up with a handful of intelligible quotes. But our conversation did give me a window into Darge’s approach to this and his other projects.

Legendary Rockin’ R&B includes sides from mostly obscure and forgotten artists, many of whom wouldn’t record much if at all beyond the tracks compiled on this set. In fact, a search via the usually reliable Allmusic website often turned up no discographical information on artists such as Artie Wilson (the bandwagon-jumping yet delightful “Tarzan”), Frank De Rosa (“Irish Rock”) and the Egyptians (“Flipping Their Top”). 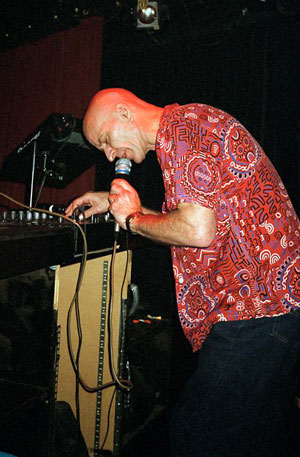 Some more well-known artists are represented, including Big Maybelle (“That’s a Pretty Good Love,” previously comped on Rhino’s excellent and essential jump blues volumes of their Blues Masters Series) and Johnny Guitar Watson, but for the most part the songs on Legendary Rockin’ R&B will be delightfully unfamiliar to all but the most hardcore music historians.

So how does Darge find these records? He laughs heartily and repeats a phrase I used in my question. “Field research! Ha!” While I had maintained visions of Darge trekking the USA through dusty record bins, he says that he uses that method of finding music less and less often these days. “Well, nowadays, it’s very, very easy,” Darge admits. “I sit with a cup of tea in front of my computer, and go on eBay like everyone else!”

Of course it helps if one knows what one is looking for, and here Darge’s extensive knowledge is essential. His old method involved visiting warehouses and private collectors, and obviously Darge finds this at-home method much easier. Unlike actual field research, it doesn’t — in Darge’s words — “cost a bloody fortune.”

Master tapes are often difficult or impossible to locate, so many of the tracks on this and other Darge-curated comps make use of “needle drops,” sourcing the records from, well, actual records. They’re digitally cleaned up as much as possible, but the rawness of the grooves comes through in, well, the grooves. And because the larger labels have the resources and interest in putting together their own compilations, Darge says that he focuses instead on the smaller labels. And while he allows that “if one of the major labels said, ‘come into our vaults and put together a compilation,'” he’d jump at the chance, he stresses that he “love[s] the obscure stuff.”

I observe that on some of the new comp’s tracks — as well as some on Lost and Found — I can clearly hear off-pitch harmonies, wrong notes, mistakes. Darge agrees that these qualities only add to the music’s charm. He explains that some of his favorite music is “hillbilly” music, and chuckles that “I love it when they sing out of tune. It’s so…pure.”

Since Darge compiles so many of these collections, one can assume there’s a formula for deciding what sort of music to put on each one. The truth is surprisingly simple and straightforward: “If I do a compilation this week, it’ll probably be a collection of records that I played in the club six months ago.” So while the music may often be old, there’s a certain freshness and immediacy to the collections. 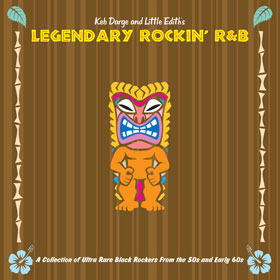 It’s tempting to romanticize about the unknown artists whose sides make it onto Legendary Rockin’ R&B, to wonder about their lives. The truth is often a bit more mundane than one might hope. “I find it interesting,” concedes Darge, “but ninety percent of it, I wonder if [those artists] even did anything else.” Darge tells the story about getting in touch with some of the artists he’s comped, and says that some of the artists have an interesting reaction when they realize that a track that they cut in, say, 1957, is still being enjoyed in 2010. Sometimes, he says, “they cry.” He quotes a familiar sentiment that he hears: “I’m nothing in the States, but I’m a fucking hero here! I made that record fifty years ago, and we sold forty-seven copies!”

I ask Darge if at the end of the day he prefers the Stax or Motown sound. “Neither,” he cackles. “Both are, to me, too much about pop.” He concedes that there were “a few really great records on both labels, but if I want real soul, I’ll have to go to the smaller labels.”

Asked if he ever worries he might run out of rare and obscure material to unearth, Darge has a ready, candid answer. “I did, with the funk stuff,” he laughs. But his current obsessions — soul, r&b, rockabilly and jump blues — guarantee to keep him busy for sometime into the distant future. And while he has nothing good to say about current hip-hop or pop music, he does believe that there is still good music being made. And he agrees that that music will probably be rediscovered forty years on by some 2050 version of Keb Darge.