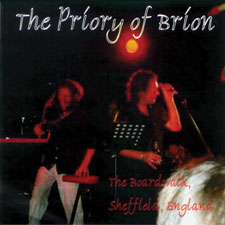 In the mid- to late-1960s Robert Plant did a stint as lead singer for Band of Joy (no musical relation, sadly and somewhat perversely, to the group of the same name he formed in 2010). That group covered cutting edge US west-coast groups Love, Buffalo Springfield and Moby Grape. Plant then spent the better part of his time since ’69 in Led Zeppelin; then as a solo artist mining territory a bit to the pop side of the Zep style; then in collaboration with his partner Jimmy Page.

In 1999 Plant surprised many by going on tour with Band of Joy guitarist Kevyn Gammond and a band calling itself Priory of Brion, doing the same sort of music. This set finds the group covering much of the best of the 60s, yet eschewing overplayed “oldies radio” type tracks. The set opens with Donovan‘s “Season of the Witch.” Over the course of sixteen well-chosen numbers, the band touches on Tim Hardin (“Morning Dew”), James Brown (a fiery “Think”), Dylan, the Youngbloods and many others. To some extent, the group makes each song its own; the tunes are presented in a manner that is neither slavish nor needlessly “updated.” By far the set’s highlight is a menacing rendition of Love’s “A House is Not a Motel.”

Technically, the sound is excellent but not quite perfect. Some static and distortion is present on the third track, and the audience is nearly inaudible throughout (suggesting that this may in fact be a monitor mix). Other illicit recordings exist from the Priory of Brion’s tour, but this is the only known soundboard. Zep fans looking for extended guitar solos are advised to look elsewhere; the emphasis here is on the songs. As Plant says when opening the show, “Our intention is permanently to enjoy ourselves, and sometimes to do it in a most peculiar fashion.” Then, in an aside, “Should sound good on bootleg.” He’s right, of course.

Difficulty to Locate: 3 out of 10
General Listenability: 9 out of 10