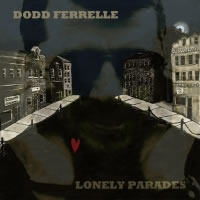 Technically, one supposes that Dodd Ferrelle is a singer/songwriter; he’s obviously spent some time getting his heartfelt lyrics just-so. Yet the eleven songs on his latest Lonely Parades can be enjoyed even if the lyrics are ignored; he’s a rocker in the proud tradition. The album is a consistently fine listen, and it’s littered with real gems. “I Can’t Wait” is a near-perfect synthesis of everything that makes pop music great. Touchstones include the best work of powerpop legends Raspberries (in the song’s don’t-bore-us-get-to-the-chorus structure), Matthew Sweet (especially the lovely use of glockenspiel, backwards guitar and fiddle) and Paul Westerberg (Ferrelle’s vocal mannerisms).

Speaking of glockenspiel, Lonely Parades makes intelligent use of nonstandard (for rock) instrumentation throughout. Banjo, triangle, pedal steel, lap steel, trumpet, Mellotron, e-bow, mandolin, cello, and even saw are clear in the mix. And they’re all present in service of the songs, not as some sort of kitchen-sink gimmick. Production and assorted instrumentation is handled by Athens GA jack-of-many-trades David Barbe, perhaps best known for his work with Bob Mould in Sugar.

The spooky saw on “Life’s a Dream” is the effective centerpiece of this plaintive march. “If You Could Live Another Life (Would You?)” features keening pedal steel guitar and an insistent beat that calls to mind a harder-rocking Tom Petty. Along with “I Can’t Wait” it represents the high point of Lonely Parades, but that’s not intended as a disparagement of the other tracks; there’s no filler on this disc. The album covers a wide range of styles, yet each fits within Ferrelle’s approach; he’s no dilettante, and sounds every bit as at home on the countrified tracks as on the rockers. In fact he successfully blends the two styles into a mix that — oddly — isn’t really country-rock. Ferrelle treads musical territory in the same region as John Hiatt or Nick Lowe, yet he leans in a pop direction. Barbe’s up-front production is clear and focused, delivering muscle and power as well as nuance. It’s a neat trick to rock out and still have the glockenspiel come through, but Ferrelle’s arrangements and Barbe’s production and mixing accomplish the feat.

This is an album that deserves a wide listen. Recommended.