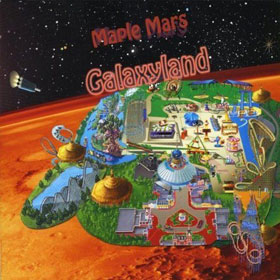 Intelligent, well-produced powerpop generally draws its inspiration from a rather short list of influences. While the most mediocre powerpop tends to chase its own tail – serving up predigested, overly derivative pop you’ve heard before – the better quality stuff manages to have it both ways: remaining firmly grounded in the powerpop tradition of its foreberars, and still offering something new and exciting.

The latter is tougher than it might seem. I have no problem at all with derivative acts: Take my favorite critical punching bag, Oasis. They served up little in the way of originality. Did it keep them from creating a couple great albums (and some good ones? It did not.

In any event, Maple Mars‘ new album Galaxyland succeeds against the odds. While it’s true that to be successful in the powerpop genre, you simply have to pay a stylistic debt to the canon of influences (Beatles, Who, Raspberries, Big Star, etc.) it remains possible to maintain one’s individuality. But to do that you have to have that identity to begin with. Maple Mars does.

Right out of the gate, the band makes a stylistic nod to the works of Tommy Keene and Teenage Fanclub. “The Excursion” has the lyrical texture of Keene’s work, and the instrumental attack has that sweet/sour balance of poppy grunge for which Scotland’s finest are known. As an added bonus, the song’s subject matter is a perfect leadoff to a loosely-defined album concept a la Jason Falkner’s “The Invitation” or (dare I say) “Sgt. Pepper’s Lonely Hearts Club Band.”

So on Galaxyland Maple Mars establish early that their antecedents are once or twice removed from the Founders of Powerpop. That’s fine: they’re a young band. One takes inspiration from where one finds it.

Especially on its bridge, “Starting Over (Again)” suggests that these Maple Mars guys (mostly Rick Hromadka) have been partaking of the Grip Weeds. The song features punchy arrangement slathered with creamy harmonies. Had Galaxyland been released fifteen years ago, it would have driven Jordan Oakes crazy: which of several fine tracks to include on the latest Yellow Pills collection? Dual lead guitar fills conjure smile-inducing memories of Thin Lizzy.

Fender Rhodes piano is the foundation of the ballad “Big Imagination.” With a feel similar to Pilot, the track is impressively arranged, with the instrumentation expanding as the song unfolds. That 1970s approach of wedding big (yet brief) stadium-size guitar solos to midtempo/ballad arrangements is in full flower here.

Maple Mars show that their understanding and appreciation of powerpop goes fairly deep. They cover Mark Radice’s 1972 song “New Day.” Now, Radice is a fine artist, but his name will elicit blank, unknowing stares from most music fans. They’re more likely to know who, say, Van Duren is. But the song is a gem, performed here in a baroque-rock style similar to another criminally underappreciated band, North Carolina’s Gladhands.

“Transcendental Guidance” mixes the acoustic side of Badfinger, the soft, chiming rock of Pilot and the lyrical focus of Beach Boys from that same time period. “Citizen Roger” looks (relatively) forward: the song would easily fit on Redd Kross’ 1993 Phaseshifter. The song starts as a midtempo tune, but builds the ferocity of its attack as it develops. And as I’ve written many, many times before, I’m a total pushover for effective use of “ba ba ba” as lyrical material. Maple Mars nails it here, delivering the ba ba ba with an anthemic boom. The song’s outro features that plus a killer riff that’s repetitive in the best way, making the track a highlight of an excellent album.

“When Bridges Fall” is the latest in a proud line of mini-baroque numbers from rock artists. The Beatles’ “Eleanor Rigby,” Paul Revere and the Raiders’ “Undecided Man,” you get the idea. Here the orchestration is kept simple and straightforward, and has just the right amount of edge to make it closer in feel to No Answer-era Electric Light Orchestra.

If “Borrowed Sunshine” wasn’t intended as a Tommy Keene tribute, it should be. The song conjures up all of the best of Keene’s style, balancing wistful, bittersweet feel with a sort of unbridled joy. And the song’s second half adds even more texture, heading into “oooh” territory. It’s worth noting that few bands this side of 1960s-era Beach Boys have the ability to credibly sustain “ooh” as the lyric for more than a few bars. Maple Mars can be added to that list.

“Add the Numbers” features a pleasingly stripped-down arrangement that suggest what Jellyfish might sound like with less instrumentation, and if the songs were written on guitar rather than keyboards. Despite its name, “Head Turner” is not an ode of love to Linda Blair, but it is a love song.

Galaxyland wraps up with “Somewhere Back There,” a bright and bouncy tune that restates all of the album’s best qualities. Ringing guitars, an insistent beat, those oh-so-1967 descending piano lines, clever sound effects…it’s a sturdy pop tune with kitchen sink production. A Queen-like guitar solo gives the track just the right feel, helping to make it a timeless powerpop song, rather than one that’s firmly rooted in a particular sub-sub style.

And that quality is true of the whole album. If you like powerpop, you’ll like Galaxyland. Simple as that.

The album is available from Kool Kat Muzik.