DVD Review: Chickenfoot – Get Your Buzz On LIVE 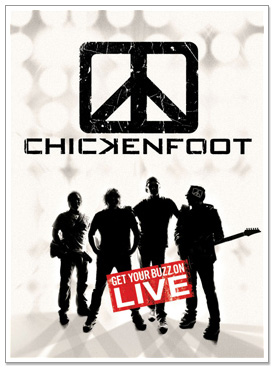 Vari-lites. Steadicams. Logo branding right down to the guitars and mic stands. And an unexpected Christian-themed opening. What’s this, you ask. Why, it’s Chickenfoot‘s live DVD Get Your Buzz On.

Supergroups have a patchy track record of success. True, that term is sometimes misapplied to groups that make it big, but proper use of the term applies only to groups made up of artists who’ve already established names for themselves. Or, at a minimum, people who were at least in a previous band that made a name for itself. So while Blind Faith and GTR were supergroups, Duran Duran wasn’t, no matter how many units they shifted.

Supergroups tend to be a marketer’s wet dream: they arrive — or so goes the theory — with a built-in fan base, or even multiple fan bases. So they’re something approaching a sure bet in a marketplace that has few such things. Artistically, historical examples have provided mixed results.

Chickenfoot has two refugees from Van Halen (or Van Hagar if you’re a smartass): vocalist Sammy Hagar, who took David Lee Roth‘s place for awhile — and bassist Michael Anthony. Hagar, of course, has an estimable career as a purveyor of a particular sort of rock, and said career goes way back before Van Hagar or Van Halen. Never much of a VH fan myself, I used to have a laugh at Anthony’s expense, watching him play the most rudimentary of basslines under Eddie‘s show-offy guitar wankery. But he’s improved since the cover of the Kinks‘ “You Really Got Me,” I guess.

Drummer Chad Smith (Red Hot Chili Peppers) is on board as well, a veteran of yet another band that — though their musicianship is impressive — never did a thing for this listener. But the star of the show — and the only reason I was interested in this DVD to begin with — is shredding axeman Joe Satriani. His guitar wizardry is beyond compare, so if you’re into that thing (and you don’t mind some vocals fighting for attention), then Chickenfoot might just be your thing.

On lead vocals, Food Network personality Guy Fieri (Diners, Drive-ins and Dives) makes an appearance…no, wait: that’s Sammy Hagar! Honest mistake. And taking a page from the “Jazz Odyssey” period of Spinal Tap, the Chickenfoot DVD set opens — after that backstage prayer session — with a song (“Avenida Revolution”) that features a bass solo. No, I’m not kidding. Why, I cannot tell you.

“Sexy Little Thing” will appeal to fans of Mötley Crüe‘s “Girls Girls Girls” for at least two reasons: it covers the same subject matter, and, well, it’s nearly the same song. And “Soap on a Rope” kicks off with lyrics cribbed from Deep Purple‘s “Highway Star.”

Point is — to the extent that there is a point — this is pretty standard, derivative stuff. Taken as songs, well, there’s not really all that much on offer here; certainly little new. The playing is ace, and from the looks of the audience, they do pack in the house, but Chickenfoot isn’t breaking any new ground in terms of songcraft. Most of the songs are credited to Hagar and Satriani, but they’re not full of very interesting ideas beyond Satch’s solos.

Taken as performances, what Chickenfoot serves up is pretty standard 80s/90s styled arena rock, with all of the swagger and posing that suggests. But the presence of Satriani helps: his dizzying prowess on the guitar, his constantly inventive approach to the instrument, adds a level of interest that would otherwise not exist. Simply put, without Satch, there would be little to recommend Chickenfoot beyond its appeal as a second-string Van Halen retread.

Flo and Eddie used to have a radio show in which they’d deejay a bunch of songs. They’d routinely pull the needle (so to speak) off a record after a few seconds, arguing that by that point in the song, you’d already heard everything it had to offer. Using that methodology — and again, not considering the solos — one could blast through the Chickenfoot catalog in a few minutes.

It’s not terrible, not at all. But if hearing Sammy Hagar sing lyrics like “broken heart, broken rules” doesn’t fulfill your need for some interesting lyrical ideas, then you might not find Get Your Buzz On to be all that, well, buzzworthy. As the saying goes, there’s plenty to like for people who like this sort of thing. Otherwise, you might find a G3 live set more involving.