Interview: The Residents (sort of…)

(NOTE: This feature was originally published in Skope Magazine in 2006. –ed.)

The Residents are weird. And obscure. And difficult. 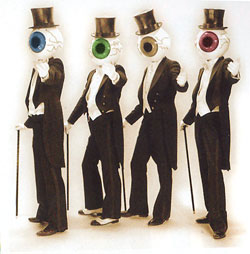 While all three assertions have a healthy amount of truth to them, The Residents have been recording and releasing challenging, relevant music since the 1970s. Originally farther out musically than anyone you’d care to name, in recent years The Residents have inched toward accessibility. But they’ve done so on their own terms, without compromise. Residents’ spokesman Hardy Fox suggests that this is due to the group “getting more polished at what they do.” He speculates (well, perhaps it’s more than speculation; more on this in a moment) that “they may be a little less willing to be as grating as they were in the past.” But in the end, “they don’t have a point of view as to whether their music is accessible, or (laughs) easier listening.”

The Residents have made a career out of anonymity. While some romanticize that they might be a quartet of well-known artists living out their arty obsessions incognito, the more likely story is that they are probably Hardy Fox and Homer Flynn. Officially, Hardy Fox is merely their spokesman; almost without fail he refers to The Residents as “they” rather than “we.” The Residents never grant interviews, and Fox hasn’t done that many. Yet when I spoke to him by phone in January, he was affable and forthcoming (though, like any good spokesperson, remaining firmly in-concept and on-message).

Their recent output has been nothing short of prolific. In 2006 they released The River of Crime, a compilation of chilling yet (intentionally?) underdeveloped narrated pieces. Early copies included an instrumentals-only remix bonus disc that easily stands on its own artistically. The group also put out Tweedles, perhaps the darkest work of a long career littered with dark works. If that weren’t enough, two compilation volumes of instrumental works (Best Left Unspoken Vols. 1 and 2) and an internet-only release (RMX) dropped in winter 06/07. Add to that a steady stream of authorized re-releases of earlier works (chief among these the expanded Freak Show CD/DVD package) and playing keep-up-with-the-Residents becomes a full-time endeavor. 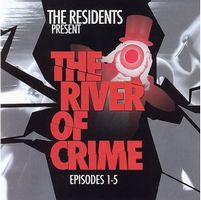 In late 2006 the Beatles estate released Love, an album of what might be called mash-ups of Beatles songs. Yet some three decades earlier The Residents created a Beatles mash-up called “Beyond the Valley of A Day in the Life.” Producer George Martin and his son are getting critical notices for doing something supposedly “innovative” when The Residents did it better–and certainly less reverentially–in the 1970s. As to why Apple Records’ lawyers never came calling, Fox cites the under-the-radar, limited-release nature of the single and opines that “usually the lawyers will only go after something that’s going to pay for their hourly wage.”

Do The Residents consider themselves pioneering or visionary in any way? Fox: “I think that from The Residents’ perspective, they do it over and over again. From their point of view, they were an early pioneer in punk music when they covered [The Rolling Stones‘] ‘Satisfaction.’ They were early [exemplars of] world music with Eskimo. They were even early near-dance music with Diskomo. They do these experiments. The thing is, they never lock into something where they sort of establish a genre, a [sense of] ‘this is who they are.’ They hit and run.”

Are future tours out of the question? “There’s really no such thing as ruling out anything with The Residents,” Fox says, “Because even if they say they’re not going to do something, it doesn’t mean they won’t change their minds.” Yet “it is a reality that they’re getting older, and finding that their comfort needs are higher than they used to be. Not that long ago…they did three tours back to back.” But he teases, saying “you never can tell. Sometimes they’ll just show up” somewhere.

The group’s Myspace site features many of the short-short Timmy films (originally destined for the unfinished Freak Show film). These seem to bring out frustration and anger in some people. One bemused commenter seemed to hit the nail on the head when he wrote “The Residents aren’t meant to be understood, only enjoyed.” What reaction do The Residents want to their work? “That would be really hard for me to answer,” he mulled, “because I don’t really have the impression that they care.” Further, their outlook is that “their fans don’t want them to care.” Fox says only that The Residents “feel a responsibility not to repeat themselves.”