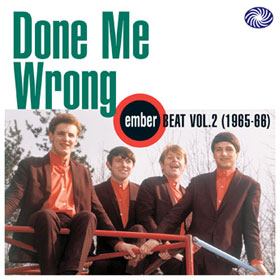 Surveying the 1965-66 brand of beat era music from UK indie label Ember, Fantastic Voyage’s compilation Done Me Wrong serves up some two dozen examples of the genre. Like Tell Me, the first entry in the series, this disc mostly features obscure numbers by unknown artists. It also features a bunch of Chad & Jeremy numbers — five this time — to leaven the rockier numbers.

But the duo had by this time evolved a bit beyond their ersatz Simon and Garfunkel phase, and turn in some worthwhile performances, especially “The Truth Often Hurts the Heart.” However, their cover of the Lennon-McCartney original “From a Window” lacks feel; the drum arrangement is mostly to blame for this, but to be fair The Beatles never cut a version of this song for a reason.

The Midnights‘ “Since I Lost You” mines territory familiar to fans of “I’m Henry VIII” and music hall, but a few arrangement tricks elevate the song.

Producer Mark Wirtz would go on to some fame in the UK, and some of his early production work included sides by one Grant Tracy. Numbers like “Tell Her I Lied” aren’t wholly successful — some of the sonic elements don’t come together properly — but the ambition in the arrangements is so brazen that the whole affair earns a pass. Listeners may find it occupies that heretofore unknown space midway between the productions of Phil Spector (especially, oddly, his girl-group work) and the work of Joe Meek. To that, add a bit of Brill Building sensibility, and you’ve got these Grant Tracy sides.

Additional sides from the Midnights bridge the gap between pop and what collectors would later label freakbeat. “Show Me Around” features dual lead vocals a la the Beatles’ “The One After 909” and a driving rhythm section. Little to nothing is known about the band that created this and a few other exciting numbers included on the disc. Their “Only Two Can Play” is a distant (and almost assuredly unknowing) cousin of The Magicians‘ “Invitation to Cry,” a single compiled on the original Nuggets set.

Two sides by the Washington DCs wed pop songcraft to beat styles. Come to think of it, that approach is a common thread that runs through much of Fantastic Voyage’s beat era survey. The Brothers Grimm take pages from the stylebooks of PJ Proby, Tom Jones and Gerry & the Pacemakers for their memorable “A Man Needs Love.” The group apparently had some stylistic breadth: their “Looky Looky” is included on Fantastic Voyage’s survey of Ember soul, Good to the Last Drop.

Live albums were a dodgy proposition in the sixties, but demand for them did exist. The solution? Fake it. Ember put out a cash-in various artists LP called Liverpool Today: Live at the Cavern. The only recognizable name on the marquee was Bob Wooler. He was the compère at the Cavern, where these sides were most definitely not taped. All that said, a cover of “Daddy Rolling Stone” by Earl Preston’s Realms is fun stuff, and the recordings do approximate the live aesthetic, complete with tinny high-end frequencies and dubbed-on applause.

Another Ember compilation of the era was the 1966 Ireland’s Greatest Sounds. Side two of that LP is included on Done Me Wrong. The first and best of the five artists is the Alleykatz and their number “The Friendly Undertaker.” The song sounds more like American garage rock, complete with cheesy combo organ, rudimentary blues changes and unadorned arrangement values. But the organ solo betrays some serious chops.

“On the Waterfront” by the Bats would fit comfortably on Nuggets II: British Empire and Beyond. All that is known about this group is that they’re not the same Bats who scored some UK hits. And if this reviewer didn’t know better, he’d suggest that was Cher on lead vocals.

For anyone interested in the lesser-known reaches of sixties beat, Done Me Wrong is recommended along with the Tell Me, the volume covering the earlier period. Next up: After Tonight, a survey of Ember beat 1966-67.