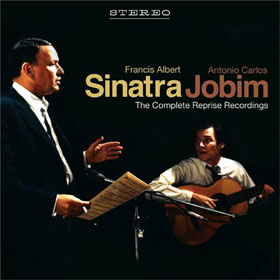 This one’s a bit problematic. Sure, The Voice is in fine form: few singers before or since have been possessed of such seemingly effortless control over their instrument. Sinatra handles the subtleties of the music ably (for the most part).

The music contained in these sides certainly sailed against the prevailing musical tides of 1967. Though remaining a major concert draw, by the late 1960s Frank Sinatra couldn’t easily shift units like he once had. So his collaboration (a fairly rare instance of co-billing) with Brazilian guitarist/vocalist Antonio Carlos Jobim can be viewed as a bid for success in the “adult music” (or “good music,” as it was often called) market.

But for people of a certain age — like this reviewer, who grew up on 60s AM radio — this sort of music falls into what we less-than-fondly remember as a genre perversely dubbed “easy listening.” As the too-hip-by-half liner notes admit, any rough edges this music might have had were dutifully sanded off in the recorded performances. One can’t travel much farther musically in Sinatra’s catalog than the distance between a swingin’ big-band fest like It Might As Well Be Swing (a 1964 co-bill with Count Basie) and Francis Albert Sinatra & Antonio Carlos Jobim from a mere three years later.

(About those liner notes. Readers who have ever taken the effort to read Beat poets or any of Ken Kesey‘s novels understand that such an endeavor requires some work. It takes some time to adjust one’s mind to understanding the hip argot. But the effort yields rewards. Less so with Stan Cornyn’s liner notes. Though clearly the work of someone who knows — and can excel at — his craft, the liner notes of this compilation are just too screamingly self-conscious and faux hip for words. Plenty of relevant and interesting information is delivered, but the form weighs down the content. Proceed at your own risk.)

But back to the music. The strings are syrupy, the percussion muted, the arrangements quiet. Again, there’s the voice, and for that reason alone this compilation is worthwhile. But to say it’s less than exciting is to the commit an egregious act of understatement. A high point — though that label might be too strong a descriptor — is a cover of Cole Porter‘s “I Concentrate On You.” But Sinatra’s ad-libbed(?) “ding ding ding” vocalizing comes off as clichéd, and the arrangement owes more to Ray Conniff than, say, Billy May. The album’s overall tone is flat and one-dimensional: if you like “The Girl From Ipanema” and are okay with nine lesser variations on that theme, you’ll like this. Otherwise, perhaps not so much.

Of course excitement wasn’t the goal. The 1967 album was considered a success at the time, and so a few years later Sinatra and Jobim reunited for the inevitable follow-up. But Sinatra ended up reconsidering the quality of that finished product — released as Sinatra-Jobim — and ordered it pulled from store shelves. In 1969 such was Sinatra’s clout that what he said, went. So ultra-rare 8-track copies of the album — stickered with laughably bad and pointless cover art — are now impossibly rare.

The sessions for that follow-up album — seven of which eventually appeared as one side of a 1971 album Sinatra & Company — have a tiny bit more spark than the earlier sides, thanks mostly to the presence of arranger Eumir Deodato. Deodato was right on the cusp of fame for his discofied hits. Here he breathes some life and wide-screen ambience into the songs, but the songs themselves aren’t possessed of much distinct personality. All the tunes from the follow-up were composed solely or in part by Jobim, and — as the liner notes suggest — Sinatra wasn’t enamored of the lyrics, viewing them as having too much of a “translated” feel.

“One Note Samba” is the high point of the sessions for the second (recalled) album. It does indeed have more than one note, and in fact shows Frank Sinatra doing a bit of vocal acrobatics, but he still sounds like he’s sitting in a comfy lounge chair while he’s singing.

Frank Sinatra’s instincts generally served him well, and his insistence at keeping three of the ten tracks slated for Sinatra-Jobim unreleased was, in retrospect, a reasonable call. “The Song of the Sabia” isn’t awful, but neither is it very good, and its quality is easily a notch below the tracks released in ’71. The problem with “Off Key (Desafinado)” has nothing to do with Frank’s inability to hit the right notes — he hits ’em fine — but his delivery is at times mincing or strained. And those are two words one can almost never apply to Sinatra’s vocals. The tune is a must to avoid. And on “Bonita” the Chairman does seem to miss the marks a few times; he sounds listless and disinterested as well.

Still, the decision to pull the album is hard to understand: if you liked the first album, what wasn’t to like here? Well, besides the cover (reproduced in the CD booklet) that’s so awful it must be seen to be believed.

The 2010 compilation brings together the first album’s ten tracks, and adds all ten of the songs slated for Sinatra-Jobim, including those three previously-unreleased dogs. Kudos are due to Concord Records for bringing all this material together in one place.

One might make the argument that this music is “romantic” and should be appreciated in that spirit. But better examples of romantic music exist. Though this reviewer is — like Sinatra in recording these sides — sailing against the consensus, Sinatra/Jobim: The Complete Reprise Recordings can’t be recommended without reservations. It’s worth a listen, but shouldn’t be among your first few dozen Sinatra album purchases.