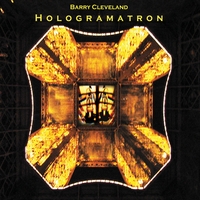 One might not readily think that combining the genres of “protest music” and progressive rock would be a good fit. And perhaps in general they’re not: prog is more often than not about the music (rather than the lyrics), and the best protest music (Dylan, Phil Ochs et. al.) often concentrated on the words to the ultimate detriment of melody.

Guitarist Barry Cleveland tries to have it both ways on Hologramatron, and he largely succeeds. Ominous arrangements that betray hints of everyone from Robert Fripp to Tool to (even) the Residents abound on the disc, but they’re somehow presented in an accessible fashion. By no means radio-friendly (for whatever that would be worth in this era, anyway), Hologramatron is a treatise on narrow-minded politics, intolerance and the overarching influence of organized religion.

Staking a position not far removed from Roger Waters‘ “What God Wants,” many of the songs on Hologramatron feature the edgy vocals of Amy X Neuburg. Her approach combines a deftly-delivered torch-jazz style with a sung/spoken Lou Reed kind of delivery, and it’s quite effective. The band does their thing right behind her, and while there’s a lot going on, the rubbery fretless bass and big-kit drumming are the most noticeable common elements.

On the instrumental “You’ll Just Have to See it to Believe” Cleveland and his cohorts create a moody dreamscape. Subtle hints of Discipline-era King Crimson (specifically “The Sheltering Sky”) flavor the track. Cleveland plays the new Moog guitar.

“Warning” is a fitting title for the clattering, haunted house number that features menacing spoken word and what the liner notes call “chain link drums.”

Joe Meek‘s “Telstar” gets an almost dance-electronica treatment. Though the signature melodic line is delivered intact, the instrumental backing transforms the pre-British Invasion hit into a rave number. Amy X Neuburg turns in a vocal line that will evoke comparisons to the Star Trek theme. Which, come to think of it, may well have been influenced by the Joe Meek song to begin with.

“Dateless Oblivion & Divine Repose” closes out the album proper with a soundscape built around Cleveland’s playing of something called a GuitarViol, which the press kit describes as “a hybrid bowed instrument tuned like a guitar.”

Three remixes close out the album, and each reinvents the original enough to justify its inclusion on the disc.

Taken as a whole, Hologramatron is an effective collection/synthesis of folk-protest song, rhythmic/textural explorations, soundscapes and inventive reinterpretations of classic songs from half a century ago.