Interview: King Khan and the Shrines

Note: the inimitable King Khan brings his crazed live act back to my town — Asheville NC — tonight. So I thought it would be a good time to re-run a story from a year and a half ago, the last time the band rolled through. If you’re in or near Asheville, DO NOT MISS tonight’s show.

There may be better bands than King Khan and the Shrines: bands with calculatingly unparalleled prowess, capable of bloodless technical precision. But King Khan and the Shrines aren’t interested in that fancy-pants conservatory graduate stuff. Their playing is expert, but balances right on the edge of chaos. Should-be classics like “(How Can I Keep You) Outta Harm’s Way” and the S&M-is-fun “Torture” crank out a sound that answers the (perhaps unasked) question: “What would Iggy and the Stooges sound like with a B3 organ and horn section?”

With four albums of new material released since 2001, the Shrines have built an impressive catalog of music. But until recently, locating any of it was tough for American fans. That’s being remedied: in 2008 Vice Records issued The Supreme Genius of King Khan and the Shrines, a compilation of some of the group’s finest recorded moments. This April, Vice will reissue What Is!?, a previously hard-to-find 2007 set that successfully translates their blistering live act to a studio setting.

The Shrines’ approach isn’t as extramusical as that of label mates the Black Lips. On a recent swing through India, the Black Lips were up to their usual antics (mooning the crowd, spitting in the air and swallowing the phlegmy gob), resulting in that group being effectively run out of the country. Tellingly, they sought refuge with a kindred spirit at the home of King Khan. But while both the Black Lips and Shrines draw from the same deep well of inspiration, the Shrines apply greater emphasis to the musical side of the equation. Their style — Khan himself suggests “Sun Ra meets George Clinton,” but it’s perhaps better described as “James Brown meets the Sonics” — combines the raucous, direct approach of garage punk with the exuberant, high-octane charge of soul, washed down with a dose of psychedelia.

Khan and his cohorts go where the action is (he notes that “in Spain, people go ape-shit right from the beginning of the show”). And Asheville is becoming a regular destination for the musicians. Last November Khan played the Grey Eagle as half of the duo The King Khan and BBQ Show, a punk-garage-doowop project with guitarist Mark Sultan. 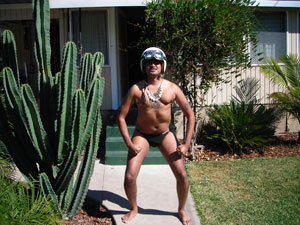 Onstage, KK&TS are a thing to behold. And while their Asheville date will find them on the relatively expansive stage of the Orange Peel, they’re quite at home in the sweaty, cramped, low-ceiling confines of a club like Washington DC’s (misleadingly named) Rock and Roll Hotel, a stop on last summer’s tour. Through their excellent, hook-filled tunes and their wild presentation (they’re anything but tame onstage) King Khan and the Shrines are the embodiment of rock’n’roll spirit.

Khan’s underrated bandmates — many of whom share his predilection for winkingly clever noms de rock like Ben Ra and Sam Francisco — boast fine musical pedigrees, having worked with artists like Curtis Mayfield and Ike & Tina Turner. In addition to the standard guitar-bass-drums lineup, the large group features a horn section, an organist and a cheerleader called Bamboorella. Her official bio claims that she “traded a life of crime, sex and drugs for a life of rock’n’roll, sex and drugs.” With her glittery mini-dress, high boots and pom-poms, this lovely lady has the job of helping whip the crowd into a frenzy. While she’s an essential part of the show, hers isn’t the toughest job in the world: audiences worldwide respond enthusiastically to the sights and sounds of King Khan and the Shrines.

Fronting it all is the irrepressible, inimitable King Khan. During performances, Khan sometimes leaves the stage, descending into the throngs of concertgoers. Followed by one or two of his fellow musicians, Khan approaches dozens of audience members, greeting them one-by-one namaste-style: he makes eye contact, places his hands together in prayer-fashion, and bows regally.

Or he may do none of that. You just never know. Maybe he’ll appear onstage in crown and cape, fronting the hard-charging Shrines while singing and flailing away at his guitar. Maybe he’ll grab the mic stand and kneel toward the crowd, a modern-day Micky Dolenz channeling James Brown. Amid all that, Khan doesn’t see what they’re doing as all that unique: “We’re carrying on the tradition of wild rock and roll.” His style is a grab-bag of many things, owing in part to his (and the group’s) international vantage point: Khan lives in Berlin (home base for the Shrines), was born in Montréal and is the child of Indian immigrants. Perhaps half-jokingly, he claims his own musical pedigree: “My great grandfather was the Johnny Thunders of the sitar.”

After press time, I was fortunate enough to get some additional time with King Khan. I rarely use the Q&A format, since I find it a lazy approach, but in this case the answers are worth it. So here goes:

Bill Kopp: Do you find it a challenge to break even or better when traveling with a large band like the Shrines?

King Khan: I never really think about breaking even. With a band like The Shrines everyone does this for the experience, because we love to play together and spread joy to the masses. But for some reason even when all odds are against us we manage to make a little something. Last year when gas prices were ridiculous we had an orange van from Alabama that was literally spraying gas out of it. We drove all over the US and still came home with a little bit of dough. And since we began promoting burning money as a form of celebration, we never have to worry about it; it just comes and goes like the wind.

BK: The band has garnered a fair amount of underground buzz and positive critical reviews, but you’ve been at it nearly a decade. Last years Supreme Genius comp on Vice certainly increased your profile. Do you have hopes and/or expectations that this tour and the re-release of What Is!? might break the band on a larger scale? Or is that not really the plan?

KK: The plan has always been there is no plan. After all the good reviews our What Is!? album got, and following the release of the Supreme Genius compilation we were finally able to bring the show across the ocean. Our first tour went really great and the reactions we got were even better than I had ever imagined. World domination was always our goal, and I think with every tour we come closer and closer to it.

BK: I saw the Shrines in DC last year at the Rock and Roll Hotel, and I thought that the small, cramped, low-ceiling venue somehow suited what you were doing. Venues like the Orange Peel in Asheville are larger, with a huge stage. Do you expect the band to come across differently in larger venues?

KK: I have always preferred seeing bands in small tight little spaces, but that’s just sexualizing it too much. We have rocked stages big and small. Usually we come across looking more professional when we play on bigger stages. And after all the years of misbehaving, looking a little professional doesn’t really do us any harm.

It’s like when I told our drummer John Boy Adonis to wear a suit and carry around an empty briefcase at this festival in Spain, he did it and instantly hooked up with a girl who basically spoon-fed him tons of booze and drugs for three days. Just goes to show you that sometimes a little deception goes a long way.

KK: The largest audiences were probably playing at a festival in Denmark; I heard someone say there were 10,000 people when we played. We played a couple of shows opening up for this hip German band and had crowds of 3-4000 people. There were a lot of people at the Pitchfork Festival but I have no idea how many.

BK: At the DC show you wandered into the audience and did a “namaste” thing to dozens of audience members. Was that spontaneous or is it a fixture of the show? How much of the show is made up on the fly?

KK: That show was a very memorable one for me, because I got to sing (David Bowie‘s) “Rebel Rebel” with Kid Congo Powers (Gun Club, Cramps) and Ian Svenious (Make Up). Two people I admire a lot. I like to keep the show as spontaneous as possible; if the audience is ready and willing, then so am I. If people come to the show and freak out than you can be damn sure that I will be there in a puddle of sweat doin’ the drop and getting my knees dirty.

BK: Have King Khan and the Shrines ever played for an audience that “didn’t get it?”

KK: Of course, but sometimes you can turn it around and make them get it. I remember once in Austria we played this mod club which was run by a bunch of jerks and so I drank half a bottle of whisky within the first three songs and started going crazy. I took off my clothes and started running around headbutting people. I was lying on top of the bar butt naked, then I started pulling people onstage and asking them to make up punk songs. At one point both my bass player and drummer went off stage because they were pissed off that I was being so ridiculous, but [eventually] they came back onstage and joined the fun.

Anyway, there was this kid with a huge set of braces. I went up to him and started calling him “metal mouth” over and over to try and get a reaction out of him, and I grabbed him and dragged him onstage and gave him the mic. He totally broke out of his shell and started singing like a little Darby Crash (Germs). The band was backing him up playing this crazy punk stuff. It was great. The kid was really very happy after that. The bar got a fine for showing obscenity to minors, and I wound up throwing up all night.I guess if an audience doesn’t get it, then f*ck them. It can be more fun in these situations because you just wind up entertaining yourself and the band.