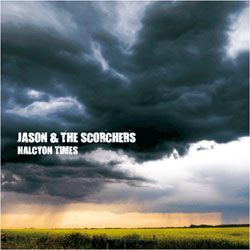 When Jason Ringenberg and his merry band of men (the Scorchers) came out with their debut EP Fervor in 1983, it was a breath of fresh air (or a kick in the ass; take your pick) to the music scene. Other bands had tried to bridge the gaps between country and rock, and with various degrees of success. But nobody could crank out C&W story-song lyrics and apply them to high-octane rock and roll like Jason and the Scorchers. Whether on an original track like “Help There’s a Fire” or “Hot Nights in Georgia,” or an epic interpretation of a Dylan tune (the absolutely brilliant “Absolutely Sweet Marie”), the group seemed destined for greatness.

And they were great. Their 1985 full-length debut Lost & Found is a classic of any genre. But fashions change quickly, and while the quality of the music remained, the market did not. Jason and the Scorchers faded from their high-profile place in the scene.

But Jason and the Scorchers never completely went away. And since they never really left, it’s less than accurate to say that they’re back. Yet in a sense they are, since the brand new 2010 release Halcyon Times finds Ringenberg and his latest lineup of Scorchers (some of whom, it’s only fair to say, have been with him since ’96) true to form. All of the punk sneer, humor, fiery playing and brilliant arranging is on display.

This reviewer isn’t primarily a lyrics-oriented sort, but one can’t help but be won over by lyrics such as these: “Likes the Stones / hates the Doors / Thinks the Beatles sing for girls.” This “Mary Had a Little Lamb” melody applied to a Cash-meets-cowpunk arrangement even features a brief snippet lifted right off the ’83 EP.

Crazed, distorted electric guitars sit comfortably alongside mandolins and harmonicas. Brad Jones‘ expert, organic production keeps all the instruments separate yet blended. In places, Ringenberg’s epic storytelling heads into Springsteen–Geldof territory, but the words never, ever get in the way of the rousing (or moving) instrumental dimension of each performance.

Perhaps Halcyon Times is as out of step stylewise as Fervor was in ’83. Perhaps not. For anyone who likes country and rock, this sure as hell beats watered-down pabulum from the likes of such country-rock pretenders as the Eagles. And it’s a great, fun listen. As one of the players exclaims at the end of a track, “I knew there was a reason I woke up this morning!” Listening to Halcyon Times is reason enough.