NOTE: The original interview is HERE. Please read it first.

Henry Rollins is currently bringing his Frequent Flyer spoken word tour to audiences in the USA, with dates in Australia and South Africa to follow. I spoke with him recently about the tour, and just turned in a piece that will run in the March 3 edition of Mountain Xpress,  Asheville NC’s local altweekly. Rollins is endlessly quotable, and since the MtnX feature was limited to 750 words, a lot of great material ended up on the proverbial cutting-room floor. What got left out was as good as what was left in. Here’s the former. It’s perhaps a bit disjointed, but worthwhile nonetheless. 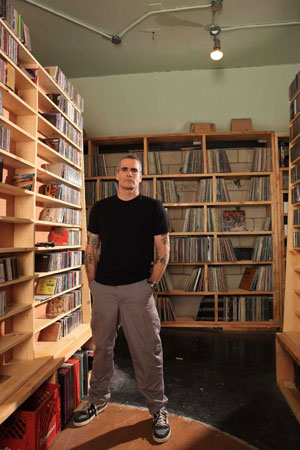 The early promoter of Henry Rollins’ spoken word gigs — this was in the early 1980s — started booking longer gigs, first featuring Rollins opening for poets and briefly, and later with poets opening for him (“which they didn’t like,” Rollins notes wryly).

Rollins always goes onstage “intellectually front-loaded,” because, “I don’t want you to wait for me to get it together. That’s not fair to you. Who wants to sit and listen to a guy figure it out?”

With characteristic candor, Rollins explains that he’s “afraid of [the] audience. I don’t want to let them down; I fear their wrath.” People have trusted him with their evening, and he “take[s] that confidence very seriously, and with a real fear. So I do not screw around. That’s why I’m not high, and it’s why I’m not goofing off before the show. By 5pm, I’m in the venue, focusing for that eight o’clock show.” He concedes that “it’s a long day, and it’s pretty extreme. But it’s the [only] way to do twenty-six shows in twenty-eight days.”

That high standard has always been a part of Rollins’ makeup. In Black Flag, the group Rollins fronted from 1981 to 1986, “there was a high degree of professionalism, believe it or not; I know we looked a little nuts. But we wanted to deliver. We would rehearse for weeks before a tour. Same thing with the Rollins Band.”

“Audiences can spot disingenuousness. They can tell when [you’re] tired, dialing it in. There’s a collective instinct. You can shut an audience down, and it starts with just one guy going, ‘aww…’”

“The way I [prepare for] the spoken-word shows is — and this will sound silly — I walk on the streets of wherever I am, and I talk to myself.” He rattles off his recent trip’s itinerary: Saudi Arabia, Indonesia, Brunei, Sri Lanka, Bangladesh, India, Nepal, China, Mali, Senegal. “I’d walk down the street fleshing out ideas about the first amendment, freedom of speech in other countries. And people look at you, a crazy mumbling white guy with a sunburn. Okay, fine: I’ve been laughed at by people since I was eight.”

“Thoughts are one thing. But if you’re gonna say things out loud for a living, this has turned out for me to be a very effective method of getting it together.” He reflects on the whole enterprise: “I don’t take many days off. I don’t want ’em.” Admitting it’s “sort of an actor-y thing to say,” Rollins strives onstage to “stay in the moment” to avoid becoming “the thing with the string coming out of its chest. Otherwise, you’re just doing the act. And the act will falter with exhaustion and repetition.

After a gig, Rollins is “intellectually drained.” He likens the spoken word gigs to “pushing eighty gallons of water out through a pinhole. By the time I’m getting on the bus, I’m sometimes literally trembling with exhaustion.”

Rollins is cagey about his next musical project, to commence this summer, post-tour. But it involves “two other guys, maybe three” with whom he’s never recorded before. He admits that “the “marquee value of these three or four people looks good on paper. What’s going to happen? I don’t know. At worst, we roll tape, have a few laughs. At best, we get an EP out of it. Who knows?”

NOTE: The original interview is HERE.