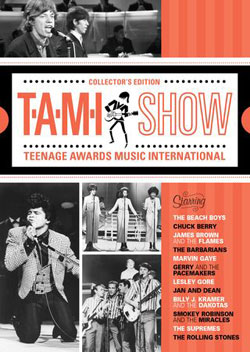 One of pop music’s lost treasures has been rescued from obscurity. The legendary and influential film The T.A.M.I. Show has been restored to its original magnificence and is set for release on DVD March 23, 2010. Never before legitimately available on any home video medium — that’s right: not on VHS, Beta or Laserdisc — The T.A.M.I. Show has circulated far and wide among hardcore collectors for years in an inferior and incomplete version.

And for years we were glad to have even that. This writer has for many years owned a copy obtained from a fellow collector, but it was plagued with the same flaws — some intentional, as we’ll see — that kept these bootleg copies from being perfect. First of all, despite the title sequence’s insistence that the Beach Boys are in the film, they were nowhere to be found on these underground copies. As it turns out Murry Wilson (father to Brian, Carl and Dennis; group manager and generally full-of-himself guy) insisted upon the Beach Boys’ performance being excised from all prints of the film — those copies sent around to theatres for projection. And it was from one of those well-worn copies that the bootleg copy was made. Further, the collectors’ copy wasn’t wide-screen, so the edges were cut off (this certainly wasn’t a pan-and-scan job; just slice off the left and right and be done with it).

The original film was shot in something called Electronovision, which, for once, was no gimmick. Electronic cameras allowing screen resolution that approaches today’s HDTV standards were used in this summer 1964 production. No kidding. While it was shot in black-and-white, it’s damn glorious black and white.

But really, why all this fuss? What’s so special about a concert film from 1964? Well, several things. First of all, The T.A.M.I. Show was the first rock concert film; that alone makes it historically important. Second, the eclectic, sweeping bill includes acts from across the pop music landscape of the day. Twelve acts — five of which are African-American — cover the cream of 1964 r&b, soul, garage rock, British invasion, early rock and roll, girl-group, vocal pop, Motown. Third, there’s the film’s visual sensibility. Director Steve Binder understands the value and appeal of the music, and — equally important — he brings to the project a deep understanding of the visual medium. Shot and edited essentially on the fly, The T.A.M.I Show always seems to have its cameras fixed on the right image.

And fourth, the dancers. You simply haven’t lived until you’ve witnessed the high energy go-go dancing of the troupe in The T.A.M.I. Show. With a crew that includes future actress Teri Garr and future in-demand choreographer Toni Basil (The Monkees, That Thing You Do! and her own guilty-pleasure MTV hit “Mickey”), there’s a clearly sexual energy put forth by these indefatigable dancers as they flail for two hours nonstop.

The centerpiece, of course, remains the music. While 46 years later a few of the acts on the bill might seem a bit naff (that Britishism is used advisedly), the caliber of performer is peerless. Most acts are seen at the top of their game, or — better yet — just ahead of their peak. The bill isn’t stacked with high-profile has-beens, not at all.

Emcees for the event are Jan and Dean. The clean-cut and likeable duo now comes off a bit lightweight, like some second-rate Beach Boys, but their sunny dispositions strike just the right note for their position as event hosts.

Chuck Berry opens the show, and in what now seems like a strange programming decision, sort of spars musically with Gerry and the Pacemakers. The two acts trade the spotlight for the first few numbers, and the Liverpool group even plays some of Berry’s hit “Maybelline.” (Some tasty gossip about Berry is included on the bonus commentary, but it won’t surprise anyone who’s followed Berry’s career.)

Berry appears solo, more or less, but it’s important to note that The T.A.M.I Show is the real deal: no lip-syncing, and no pre-recorded musical tracks. Just out of camera range (most of the time) is the house band, including legendary figures such as Hal Blaine (drums), Tommy Tedesco and Glen Campbell (guitars), Leon Russell (piano) and Jack Nitzsche (keyboards and arranging).

At the time of this film, the fresh-faced Marsden and his band are hugely popular. Their hits “Don’t Let the Sun Catch You Crying” and “How Do You Do It?” (the latter recorded by the Beatles under duress but not released until Anthology 1) are major crowd-pleasers.

Ah, yes, the crowd. A full house populated with local high school age kids (and some pacing police complete with motorcycle helmets) screams ecstatically throughout the show, reacting especially fervently anytime a performer waves or smiles in a particular direction. While such behavior would soon be de rigeur at concerts, in 1964 it’s genuine and unaffected, and quite charming.

Smokey Robinson and the Miracles turn in a winning performance. Suave and spot-on, Robinson exposes the live version of the Motown sound to an audience that — while mixed — is predominantly white, and has likely never seen an African-American performer onstage. The tight choreography and vocal harmonies of the Miracles are a delight.

Marvin Gaye is up next. His commanding stage presence and authenticity comes across well in his four-song performance, and the band — augmented with some of is own road band — really cooks.

It may be hard to believe now, but in 1964 Lesley Gore is the highest profile act on the bill. With six songs, the teenage Gore gets the most screen time of any performer. And her performance has actually worn pretty well over the years. She’s perfectly on pitch — remember, no lip-syncing here — and the crowd goes pretty wild, especially during “It’s My Party.” During that number, all of the performers who have appeared up to that point assemble onstage behind Gore. The purpose of this is twofold: to mark the end of the “first act” or halfway point of the show, and to make the point to those seeing the performance on celluloid that this was a real show, not a compilation of clips from various times and locations.

Jan and Dean turn in a couple of performances next, the highlight of which is a skateboard solo. Trust me: you’ve got to see it to believe it. Pretty edgy stuff for ’64.

In the original film, Jan and Dean introduce the Beach Boys at the end of their brief set. And though that part of the show was excised from the film, the team that put together this official release of The T.A.M.I. Show located a copy of the un-butchered film. Because that copy had been in distribution, the Beach Boys section is pretty well-worn, with streaks, scratches and blotches common to celluloid, but it’s been seamlessly edited back into the copy for DVD. Viewers will have no trouble spotting the moment when the video quality drops, but the performance is important enough to merit its inclusion despite the dodgy quality of the print.

Augmented by the house band, the Beach Boys run through four songs that put the spotlight where it belongs: on the vocals. Leader Brian Wilson (on bass guitar) is seen in one of his last performances with the band, and his lead vocal on “Surfer Girl” is itself worth the price of admission. The rest of the band is shiver-down-the-spine tight on vocal harmonies as well.

Billy J. Kramer and the Dakotas take the stage next. This, it must be said, is the only weak spot in the show. Kicking off with their biggest hit, “Little Children,” the insipid teen-idol style vocals of Kramer now seem hopelessly dated. Things improve when the band plays the remaining three songs, all from the pen of Lennon and McCartney. Keen students of rock will note that the guitarist on the left is none other than Mick Green (Johnny Kidd and the Pirates).

In 1964 The Supremes (not yet “Diana Ross and the…”) are just hitting their commercial stride. Their glamorous performance and peerless vocal delivery makes quite an impression on the audience, and the close-up camerawork is quite successful at capturing the ebullience of the trio.

The Barbarians are a left-field choice for The T.A.M.I. Show. The Boston garage band hasn’t yet had a hit, and they are (and will remain) virtually unknown except by fans of sixties garage-punk. Their long hair — much longer than those scandalous Beatles — and generally unkempt-for’64 look is probably pretty shocking to the audience in the Santa Monica Civic Auditorium. In fact the band turns in an energetic and rocking one-song performance. They more than justify their inclusion.

The inclusion of James Brown and the Famous Flames in The T.A.M.I. Show raises the importance of the film to a stratospheric level. In what is perhaps the most effective James Brown performance ever captured on celluloid, Mr. Dynamite lays it down for the audience in passionate, melodramatic fashion. What he’s singing isn’t really important: it’s how he’s singing it. And Brown’s dance moves are nothing short of jaw-dropping. The drop-and-cape antics — even though they’re now so well known as to be almost a cliché — simply must be witnessed.

Pity the poor Rolling Stones, having to follow the hardest working man in show business. Not yet a major sensation — “Satisfaction” wouldn’t be released for another nine months — the five piece (still with Brian Jones) nonetheless goes for broke, treating the audience to several songs they have yet to record. Jagger busts some dance moves clearly influenced by Brown, and it’s amusing to see the Stones in such a young configuration.

Because the film was shot and edited in real time, there are no outtakes (audio or video). But the DVD does include bonus audio of radio spots, the original theatrical trailer, and audio commentary from director Steve Binder and music historian Don Waller. Special praise is due to Waller for his entertaining, insightful and concise liner notes.

Shout! Factory has done pop culture a great service by shepherding the official release of The T.A.M.I. Show. Essential viewing from both historical and pure entertainment perspectives, this is one DVD that belongs on the shelf of every serious music fan.