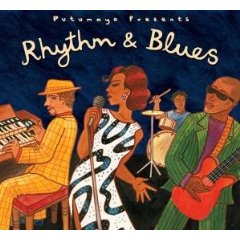 Putumayo is, for many listeners, the first stop for various-artists world music collections. But the label has recently ventured into more mainstream genres. The latest exponent of this is Putumayo Presents Rhythm & Blues. A survey of classic and contemporary artists, the twelve-track disc provides a neat capsule survey of what the liner notes calls “first generation legends and rising starts of today’s retro R&B revival.”

Lavelle White‘s horn-led “I’ve Never Found a Man to Love” kicks of the disc and remains a highlight. James Hunter‘s “‘Til Your Fool Comes Home” sounds like a modern take on Ray Charles‘ stylings, with the welcome addition of a fleet-fingered guitar solo. “Sweet Feeling” by Cracked Ice slows things down for a smoky nightclub vibe that veers closer to blues than most of the other tracks. The female lead vocal plays call-and-response with a beefy horn section.

The Quantic Soul Orchestra featuring Kabir turns in a swinging number in “Who Knows.” The Emotions‘ Wurlitzer-centric “My Honey and Me” suggest what the Supremes might have sounded like had they loosened up and caught as bus to a studio in Memphis.

One near-misstep is the cover of Willie Dixon‘s immortal “Wang Dang Doodle,” covered here by a supergroup including Sam Moore (of Sam and Dave), Keb’ Mo’ and Angie Stone. There’s nothing actually wrong with the rendition; it just seems out of place on this collection: more blues than R&B. The vaguely updated arrangement seems too slick, too polished for either genre. Stick with any number of other semi-definitive versions (I prefer Savoy Brown‘s 1971 cover). Things get back on more solid footing with Catherine Russell‘s “Put Me Down Easy,” though it too is a bit slicker than the tracks front-loaded on the disc. A banjo-like guitar solo adds a bit to the stylistic confusion.

Ruthie Foster slows things waaay down for “‘Cuz I’m Here,” heading into Aretha Frankin ballad slow-jam territory: a winner. Snooks Eaglin brings the lead electric guitar to the fore in “A Mother’s Love.” The upbeat tune — which also features ample and delightful organ soloing — is another of the disc’s highlights, and marks a slight departure in that it highlights playing almost equally with singing. Most of the disc’s tracks focus squarely on the singer.

No collection of this type would be worth of serious consideration if it didn’t include at least one tune from the estimable Sharon Jones and the Dap Kings. That act’s “100 Days, 100 Nights” will likely send owners of Putumayo Presents Rhythm & Blues to their corner record shop (or, yeah, iTunes) in search of more.

Nobody would choose to follow Sharon Jones. The people sequencing the disc must have know that: the next cut is a throwaway. Rockie Charles‘ “Before I Find the Right Girl for Me” sets a soul-stirring lead vocal atop a standard-issue late-night bar band melody. But two weak cuts out of twelve is still pretty great value for money.

All is redeemed on the Irma Thomas — Henry Butler duet “River is Waiting.” The gospel arrangement strikes all the right notes, and ends the album in fine fashion.

One of the goals of a package like Putumayo Presents Rhythm & Blues is to distill a genre or style into the highlights, allowing new listeners to check out music they’d otherwise pass by. In that, the compilers have chosen wisely. Thorough liner notes (a Putumayo hallmark) give enough information to point interested listeners in the right direction to find more of this tasty stuff.

In sum, Putumayo Presents Rhythm & Blues is recommended for what it is: a sampler, an introduction to the genre. The compilers aspire for nothing more, and they do deliver on their stated promise.