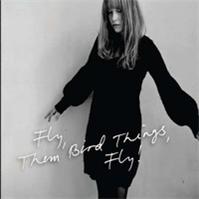 Surf rock from Finland? Well, you’d be hard-pressed to find more authentic writing, playing, arrangement or production of that style in the 21st century than you would from Them Bird Things, the pride of Helsinki Finland. But their album Fly, Them Bird Things, Fly is really more of an ultra-tuneful, moody folk-punk-psych set.

The band is fronted by chanteuse Salla Day, a singer possessed of a singular voice that is in turns kittenish, sultry and spooky. She sings with no discernible Finnish accent, but then this reviewer — like many people, I’d guess — wouldn’t know a Finnish accent if they were run over by one. There’s a punky undertone to the songs, even though they’re served up with subtlety and nuance. Them Bird Things will appeal to fans of Penelope Houston‘s solo work (more people need to know about Houston, by the way).

The songs tread into wry noir territory: “Blood Bank” is a ditty about falling in love with the guy who takes your blood. Acoustic guitar figures prominently in all of Them Bird Things’ songs, but they definitely rock, in a sort of electric campfire kind of way. More fun than the Velvet Underground and darker than 4 Non Blondes, Them Bird Things often feature, er, chirpy vocal backing and sprightly guitar figures, but a moody vibe pervades the proceedings.

“Blue Parakeet” heads toward a cocktail vibe not unlike Todd Rundgren‘s With a Twist excursion, and features sha-la-la-la vocals and electric sitar.

Music and lyrics on most songs are provided by Stephen Blodgett, an American who’s also a member of Mike and the Ravens, a very different group that this reviewer has also covered. The two projects also share songwriting contributions from Mike Brassard, and production from Will Shade, an American expatriate and frequent contributor to Mike Stax‘s Ugly Things magazine (and, as it turns out, Salla Day’s spouse).

Certain themes crop up throughout the disc. Two songs make mention of Gibson guitars; is someone angling for a sponsorship or some free gear? No matter; the reference fits, makes sense, in both instances. “I Can See Russia From Here” is a film-noir epic that pokes fun at a certain airheaded former half-term governor, but the song is a sonic delight even if one doesn’t agree that the subject is, as Day sings, “trouble.” The track’s off-kilter guitar solo has hints of Sonic Youth. You betcha! “Shame Shame Shame Shame” — a track first recorded by Mike and The Ravens — is different from the original version but every bit as worthy; a neat trick. Here it’s a slightly CCR-styled romp. “Copper Bells” sounds like a lush Dusty Springfield number played at a hootenanny.

There are vague sonic connections between Them Bird things and Sweden’s A Camp, but Them Bird Things are much more decidedly unpolished. “Your Baby’s Not Your Baby Anymore” starts off with sounds you’d expect to find on a pre-Dark Side Pink Floyd album. The song remains in dark, moody territory but does so in a Astrud Gilberto kind of way. A bit of Pet Sounds era guitar sonics are mixed in, making the song a standout on an already excellent album.

The structure of “Black Petals” is reminiscent of the (excised) acoustic intro to Cheap Trick‘s “Everything Works if You Let It.” Listen to the tune and try not to conjure visions of fog and darkness. The jangly epic “Pockets of Rain” sounds — except for Day’s vocals, of course, — like the Electric Prunes. And in fact Fly, Them Bird Things, Fly includes a liner notes endorsement from none other than James Lowe, lead singer for that legendary band. (The song’s end suggests how the song started out, and illustrates that while the songwriting is quite solid, the arrangements deserve equal praise.) The disc ends in a psychedelic, reverbed wash of sound.