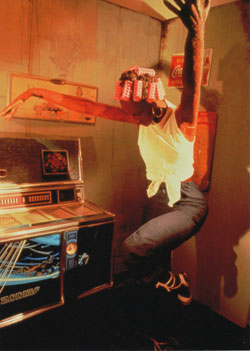 Central to the African American experience of the 1950s and 60s was the juke joint. An unlicensed liquor dispensary, it was a place for people to get together, relax, dance and drink. Free of the pressures of home or work, the juke joint was in many ways the only place where people could be themselves. Artist Willie Little developed the Juke Joint art installation to memorialize that experience. The multimedia work is currently on display at Asheville’s YMI Cultural Center.

Little grew up in the tiny rural town of Little Washington NC. There his father ran a small grocery; after hours, Little’s Grocery was transformed into a juke joint. Little’s expansive exhibit is closely modeled on that store and its nighttime regulars.

All of the Juke Joint characters are based on real people. “I was the youngest in the family, but I felt like I was privy to grown folks’ conversations,” Little says. “I was like a sponge, absorbing everything that was around me. And I told myself one day, ‘I’m going to remember this for the rest of my life.’ Every Thanksgiving, my sisters and I would sit at the dinner table and start talking about these characters. We would always start with Eshu and Glory.” Juke Joint depicts that couple “out back” engaging in stand-up conjugal activity. 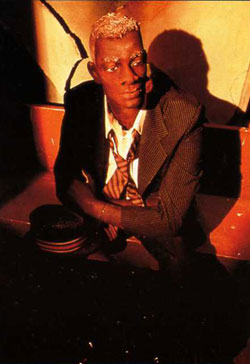 “My two sisters — who are older than me — are great mimics; one of them is even a better mimic than me. So we would become the characters’ voices, and we would have a great time. So I remember these very vivid stories, because we talked about them all the time. I carry them with me.”

In Juke Joint, as in most of Little’s work, the artist aims to convey and elicit a “visceral, emotional feel.” To that end, he makes extensive use of found objects. “I really want people to have a total three-dimensional experience with the work. Found objects always speak to me. I wanted to capture all of the objects that really put you in the moment.”

One character’s “hair” is made of sweetgum balls. “I tried to use natural elements for all of the mannequins’ hair,” Little says. “I wanted to communicate that earthy, organic feel. All of the characters are very salt-of-the-earth.”

While the store counter — complete with vintage items common to the era — is a centerpiece of the installation, other items are integral to the overall multimedia experience. 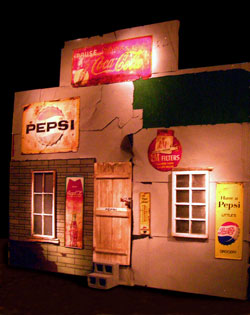 Willie Little’s narration emanates from inside a gutted vintage Wurlitzer jukebox. Over the course of ten minutes, the artist often slips deftly into the characters on display. Classic R&B and soul hits drift in and out of the mix, adding to — but never overwhelming — Little’s storytelling.

Since its creation in 1996, Juke Joint has traveled to more than a dozen venues including the Smithsonian. Little marvels that this work has “developed a life of its own, and has in some ways come full circle.” Initial funding came from an Emerging Artists Grant from the NC Arts & Science Council. The installation premiered at Charlotte’s Afro-American Cultural Center; at that time, Little notes that it was “a series of three vignettes: Eshu and Glory, Miss Odell, and Miss Beulah.” In fact, one of Juke Joint‘s first stops on its early travels was Asheville’s YMI. In its current configuration — including a three-quarter scale architectural rendering of Little’s Grocery — the exhibit now consumes two large adjoining rooms at the YMI.

One Asheville native who attended the opening reception enthusiastically shared many stories from his own youth on and around “the block”. Those stories — in turns lurid, moving, and humorous — dovetailed neatly with the Juke Joint piece.

In Asheville, places like the one Juke Joint depicts were called “hooker houses.” But in this case, “hooker” referred not to a sex worker, but a unit of measurement. “A hooker was a 25¢ glass of corn liquor,” says the man who we’ll call Jimmy. “A fifty-cent serving was called a bat-wing.” Jimmy says that the neighborhood through which South Charlotte Street now runs (destroyed in a fit of late 60s “urban renewal”) was once filled with hooker houses up and down both sides. “If you started at one end of the street, you couldn’t make it to the other end, you’d be so drunk,” laughs Jimmy. 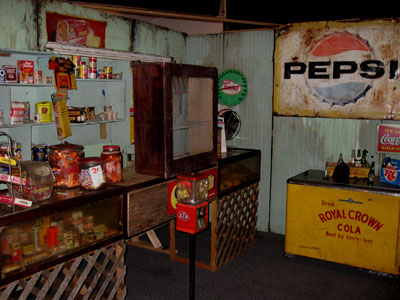 Whether from Atlanta, Baltimore, Asheville or elsewhere, visitors connect with Juke Joint‘s authentic evocation of a beloved part of the African American experience. “I created it as a personal journey and celebration,” Little allows. “But as I met people who’d see it, I realized I was telling other peoples’ stories as well. I believe that the more specific you are with a story, the more universal that story really is.”

YMI resident historian Darin Waters notes that Juke Joint helps to correct the (patently false) belief among some scholars that historically there were no African Americans in the Appalachian south. And Executive Director Harry Harrison recalled one attendee’s succinct comment about Juke Joint: “These are my people!”

Juke Joint opened at the YMI in December, and will remain on display through March 2010.

Shorter, non-overlapping, edited versions of this feature appeared in print in Mountain Xpress (December 16 2009) and The Laurel of Asheville (February 2010).