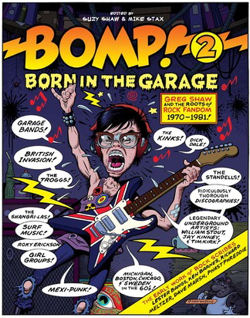 The printed fanzine phenomenon was the precursor of today’s blog. While the form got its beginning covering science fiction, by 1970 one of the medium’s most (ultimately) influential outlets was Who Put the Bomp by Greg Shaw. From 1970 to 1981 Shaw wrote and/or edited many issues of WPTB (eventually shortened to Bomp).

While early issues were typed and mimeographed affairs with readership in the mere double digits, later issues were typeset, color productions with circulation in the tens of thousands. And while Shaw’s championing of some styles and groups meant that he was prone to predictions that wouldn’t pan out (the commercial success of powerpop and the mainstream success of the Flamin’ Groovies to name two), the obsessive fandom and attention to detail kept the sprit of rock and roll alive through some lean years.

Now comes the second volume in trade paperback compilations of WPTB material, Bomp 2: Born in the Garage. Edited by Suzy Shaw (ex-wife of the late Shaw and head of Bomp Records) and Mike Stax (editor of Ugly Things). This 330-plus page edition reproduces much of the content in the best quality imaginable.

The homespun charm of the early WPTB issues comes through every bit as clearly as Shaw’s love for rock and roll. Shaw — and his eventual contributors — were writing about groups like the Remains, the Standells and Roky Erickson in the early 1970s. While those artists are all now legendary and oft- and widely-covered, in 1970 nobody but Shaw was writing about them. The garage revival of the 1980s can be traced in part to Shaw’s influence.

A long parade of later-to-be-famous writers wrote for WPTB. Ken Barnes was co-editor for a time, and WPTB included essays and review from Lester Bangs, Richard Meltzer, Dave Marsh and many others. Many issues — especially in the zine’s earlier days — were packed full of extensive discographies. Again, nobody else was doing this work in those days.

In addition to the reprints — including many of those hopelessly rare early issues — Born in the Garage also includes an exhaustive chronology of the zine’s development, plus lively and illuminating modern-day essays from Mike Stax, illustrator William Stout, Suzy Shaw, Ken Barnes and others. For anyone who appreciates good writing and/or the lesser-known reaches of rock and roll, Bomp 2: Born in the Garage will make an excellent addition to the bookshelf. Me, I’ve already ordered a copy of the earlier compilation Bomp!: Saving the World One Record at a Time.