Album Review: Mike & the Ravens – No Place for Pretty 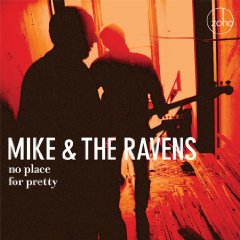 Middle-aged guys who haven’t made a career in the music biz aren’t supposed to make terrific, authentic, original rock and roll. It’s just not done. That’s the conventional wisdom, anyway. Mike & the Ravens defy that conventional wisdom. Reuniting after forty-five-plus years of doing other things, the five guys got together to release their debut, 2007’s Noisy Boys! The Saxony Sessions. Now in 2009 they follow that release up with No Place for Pretty, on which they up the ante.

Beefy bass guitar and buzzing guitar strings are the order of the day on No Place for Pretty. The focus is squarely on straight-ahead rock and roll. It’s shocking, frankly, to hear such power coming out of guys who had straight careers (some of ’em are lawyers, as it turns out). And the back-story — too convoluted and complicated to recount here — is the stuff films are made of. By all rights, these recordings should have never happened; the odds were truly stacked against the band. That it in fact did happen is a testament to the single-mindedness of all involved.

But here it is nonetheless, and the world’s a slightly better place for it. Listeners won’t find a boatload of nuance on the aptly-titled No Time for Pretty; the sounds turned out owe more to the Sonics, Wailers and Monks. This isn’t trad-rock; it’s blistering sixties punk, played convincingly by guys in their sixties themselves. Played, no kidding, like their very lives depend on it.

There are no production frills on the all-originals No Place for Pretty. The mix captures the live-in-the-studio vibe. Lyrics are often shouted; the chanting on “Dum Doovi” seems designed to bring the spirit of hard rock back from the grave, and its “Munsters Theme” derived arrangement adds a subtle twinge of dry-eyed nostalgia. “Shame, Shame, Shame, Shame, Shame” mines a Bo Beat and even throws in some harmonies, all nailed down to a martial beat. The last minute of “Broken Boy” is as frenzied as any rock and roll ever committed to wax. The neck-scraping on “I’ve Taken All I Can” suggests what Rick Nielsen might have sounded like onstage pre-Cheap Trick.

While lead vocalist Mike Brassard’s story is compelling almost beyond belief, musically the heroes of the project are the rhythm section: crackerjack drumming and punchy bass lines operate like a perfectly tuned engine. Crazed guitar lines — played, like everything on No Place for Pretty, on vintage instruments — fly atop this rock-solid foundation. The stunning “One of These Days” sounds more like the Monks than any other band you could think of. There are (unconscious) hints of Guadalcanal Diary, the Godfathers and the Blasters, but the connection is probably due more to the fact that Dave Alvin and Murray Attaway (where’d he go?) drank from the same wellspring of real rock as did these guys.

A look inside the sleeve will leave the listener with a strong sense of cognitive dissonance: these guys look like they’re on their way to a Rotary Club meeting at the local church basement. But the sounds on No Place for Pretty put the lie to that misconception. No Place for Pretty won’t change the world, and it likely won’t light the charts on fire, but it does embody the true spirit of rock and roll: players pouring their hearts out, doing what they love. At any age. Thank goodness for Mike & the Ravens. Loud fast rules indeed, and this record provides ample evidence to back up that slogan.