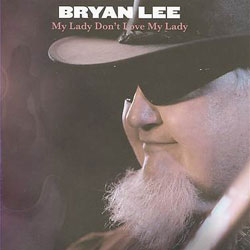 I remember it well, like it was yesterday. In fact it was late 1987. My then-fianceé (and now ex-wife) and I got a call from my favorite cousin; he and his wife would be traveling from California to New Orleans for a symposium of some sort. The Crescent City was more than seven hours’ drive from Atlanta, but I jumped at the chance to see my cousin. So at the appointed date we arrived in New Orleans.

My cousin was staying at the Hotel Monteleone in the French Quarter, so late our first night in town the four of us found ourselves wandering the district’s streets, looking for some good live music. Then as now (even post-Katrina), that’s a delightfully easy task in New Orleans, and we ended up in the Old Absinthe Bar. A six-piece blues band was holding forth in the tiny venue, and we stuck around for a few hours of great music.

Fronting the band that night was a blind white blues guitarist called Bryan Lee. At that stage of my life (my mid-20s) I hadn’t witnessed many blues artists in a live setting; as I would learn, this was as good an introduction as any. The unassuming-looking Lee could turn out lead licks like B.B. King, Buddy Guy and Albert King; he manipulated his hollowbody electric like it was an extension of his body. And his bluesy voice was perfectly suited to the band’s material, a mix of electric blues (Chicago style, with a definite greasy New Orleans slant) and bar-band standards.

We returned to the club on successive nights to hear the band again, an on the third night I scraped together enough cash to buy a cassette the band had for sale. Titled Bryan Lee, Miss Maggie and The Jump Street Five “Live”, the tape was an eleven-song board mix, recorded right there at the Old Absinthe. I still have the tape; several years ago I dubbed it onto CDR for my own enjoyment; it’s a reasonably rare document of Lee’s early work, one that demonstrates his already fully-formed style.

I later learned that at the time of my visit, Bryan Lee was in his fifth year of his residency at the Old Absinthe; for twelve years he would appear five nights a week at the place. Lee secured a proper record deal and released his first album Blues Is… in 1991. I did manage to see him at the bar one more time, close to the end of his tenure there.

In 2009 Lee released his thirteenth album My Lady Don’t Love My Lady. Subscribing to the if-it-ain’t broke-don’t-fix-it philosophy, My Lady sounds an awful lot like that cassette from the 80s, albeit without an audience and in higher fidelity. And in this case, consistency is most welcome. Lee’s assured vocal delivery was made for the blues, and his lean, assertive lead guitar cuts through the mix as it should. Backed as in the 80s with a tight band that understands the pocket, Lee sings his songs about life, putting forth a swaggerin’, drinkin’, switchblade-carryin’ persona that — one suspects — bears little resemblance to his offstage personality. He sings songs about his lady’s jealousy of his guitar (that’s the title track) and similar themes. The smoky bar vibe is captured in note-perfect fashion by producer Duke Robillard. The song titles tell the story: “Let Me Up I’ve Had Enough”, “When I Been Drinking” and so on.

The highly-respected Lee called on some heavy friends to contribute to the album. Buddy Guy and Kenny Wayne Shepherd both turn in noteworthy performances that add to — but, significantly, don’t overshadow — Lee’s presentation. The twelve songs are a modern bluesman’s ideal mix: three originals, some semi-standards and some lost classics. Lee covers Willie Mabon, Junior Wells (on the barrelhouse piano-centered “Early in the Morning”) and fellow New Orleans legend Dr. John, among others.

The arrangements cover a number of blues subvariants, from the gumbo-flavored “Just to Prove My Love to You” to the swinging “Heartbreaker” to “Me and My Music” with its pleasingly loose-limbed drumming, to the funkified title number. Even though My Lady Don’t Love My Lady is a studio affair, the energy and connection with the listener is every bit as vital, as real, as immediate as on that old tape. It doesn’t quite match seeing the real deal live, but then that’s an impossibly high standard. It’s certainly the next best thing, though. Bryan Lee’s My Lady is another high quality entry in the ongoing career of this modern yet firmly traditional blues artist.