Blue Ash were one of the 70s great powerpop bands, though they enjoyed even less commercial success than Big Star. Several years ago I corresponded at great length with Blue Ash’s guitarist Bill Bartolin. I just learned that Bartolin passed away recently. Here’s a piece I did awhile back, based largely on handwritten notes he sent me. My condolences to his friends and family.

Blue Ash – No More, No Less 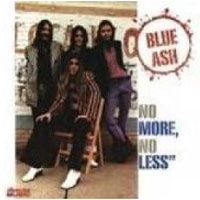 And now for something a bit different…

By the mid 1990s I had — in some circles — developed something of a reputation among collectors of unreleased material. This was in the very early days of CDR trading, so for most collectors — myself included at that time — copies of rare and unreleased material circulated on good old Maxell XL-II 90 minute cassette tapes.

To my delight, during that era I would occasionally receive out-of-the-blue emails from some of the artists I liked. With rare exception they voiced no objection to what I and my fellow collectors worldwide were doing; as the argument went (and goes), we’re the sort of people who bought all the legit stuff already anyway, so we’re not taking money off the artists’ tables. In every case where I was contacted by a recording artist, I shared what I had of their material (Bill Spooner and the late Vince Welnick, both of The Tubes, Mike de Albuquerque of Electric Light Orchestra, Tom Stevens of The Long Ryders, just to name a few of many).

Bill Bartolin was lead guitarist for Blue Ash, an unjustly-forgotten 1970s powerpop quartet based in Youngstown OH. These days, Blue Ash is getting their belated due, what with a 2CD set of unreleased material on Not Lame (now itself deleted and rare; more on that forthwith), and the Collectors’ Choice reissue of their first LP, 1973’s No More, No Less. Blue Ash is now spoken of in the same paragraph as The Raspberries, Badfinger and Big Star, but in the 90s their music was extremely hard to locate; even today, a vinyl copy of No More, No Less changes hands for upwards of $45. (Back in the 80s I laid hands on a promotional copy of the follow-up, Playboy Records’ Front Page News; it’s equally rare but — like many a sophomore album — a slight notch below in song quality.)

Bartolin located me online and we began a regular series of correspondence that continued for several weeks or more. Sadly, those emails are lost to history, but something perhaps more interesting does remain. Bill Bartolin shared several artifacts from his personal collection with me. First, he sent a cassette tape of Blue Ash live at the Packard Music Hall in Warren OH, dated January 31, 1974. The four-piece was in fine form, running through many of the songs from their recent debut LP (plus some fun if slightly predictable covers: “The Hippy Hippy Shake”, “The One After 909”, “Twist and Shout” and “My Generation”. Clearly Blue Ash were Anglophiles).

But as I often do, I digress…

Bartolin also trusted me with the loaning of a prized possession: his own personal vinyl copy of No More, No Less, in pristine condition. He lent it to me with the understanding that I would copy it onto CD and make copies for him and some of his friends, family and former bandmates. Bartolin remained in regular contact with bassist Frank Secich and vocalist Jim Kendzor, but at the time had no idea of the whereabouts of original Blue Ash drummer Dave Evans. (Evans was gone before the group recorded Front Page News.) He carefully boxed up the record and its sleeve, and sent it from his work address, at the parts counter of an auto dealership in Ohio. Along with the record, he included a note giving brief reminiscences for each of the LP’s dozen tracks.

Note that the version I compiled included the rare non-LP b-side to their single “Abracadabra (Have you Seen Her?),” a song called “She’s So Nice.” That track ended up on the legitimate 2004 release Around…Again, a 2CD clutch of 1970s Blue Ash studio sides. The recent reissue contains no bonus tracks (that’s the way Collectors’ Choice does things; and who are we to complain?). The 2008 reissue of No More, No Less is highly recommended to fans of powerpop and of 70s mainstream rock in general. The liner notes for the reissue were penned by Frank Secich, so to provide a subtly different take on the album, I present Bill Bartolin’s notes on the album, plus my occasional comments following each remark.