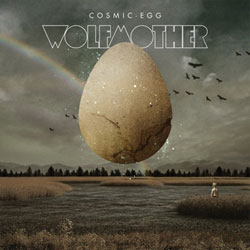 Cosmic Egg — the first album since 2005’s self titled debut — finds retro-fetishists Wolfmother expanding their sound a bit. On the debut disc they were a loud, loud, loud power trio trading in the sounds of Black Sabbath, Deep Purple, Grand Funk and Uriah Heep. After a few tours and high-profile dates (including a 2007 date at the Bonnaroo festival ) two of the members left (or were dismissed). Leader Andrew Stockdale took his time putting together a new group.

The 2009 version of Wolfmother is now a quartet. The new Wolfmother subtly adds some elements to the sonic stew. But ultimately, if you liked the first album, you’ll like this. It’s the same, only more so. Breakneck tempos set against sludgy ones, wailing vocals that occasionally calm down…they’re all here. Where the first album was shamelessly derivative, Cosmic Egg seems influenced equally by all those early 70s groups and by…Wolfmother circa 2005. It’s not clear how much of the new sound (and don’t worry: it’s not that different) is down to the new members or a product of some maturation on Stockdale’s part.

Keyboard and lead guitar unison leads on “New Moon Rising” (and a number of other tracks — it’s becoming something of a Wolfmother trademark) are a highlight; there’s enough variation in that track’s dynamics to keep things interesting. Unlike lesser heavy-rock purveyors, Wolfmother puts enough into the songs that you have to listen to the whole thing to get the full effect. That old technique Flo and Eddie used in their DJ days — play only a few seconds of a song, since the rest is just more of the same — wouldn’t work on these songs.

“In the Morning” starts out almost in an almost pastoral setting, and then builds to an arena-rock crescendo; it sounds almost like something Argent or Boston would have done. The boogie of “Cosmic Egg” sounds wholly unlike what anybody — with the possible exception of Bigelf — is doing musically in 2009. But it makes most other “modern rock” artists sound like a bunch of pussies in comparison, so there. It’s also one of the strongest cuts on this strong album.

“Far Away” begs for waving arms and lighters, and features prominent, effective use of distorted Wurlitzer Electric piano. The shrieking vocals atop the lumbering riff of the “Pilgrim” midsection are guaranteed to please anyone who believes that heavy rock saw its heyday in the first half of the 70s. The impossibly-distorted organ intro of “In the Castle” gives way to a stomping beat, and that’s just the intro; the song then heads somewhere completely different. The track is yet another example of Wolfmother’s musical growth.

Stockdale’s been listening to some Led Zeppelin albums: the complex beat of “White Feather” wouldn’t be out of place on Physical Graffiti or Presence. And there are strong echoes of Black Sabbath’s “N.I.B.” on “Sundial”. But neither of these facts will come as a surprise to anyone who liked the first Wolfmother disc. Nor will these facts be unwelcome. And let’s be clear: if you’re gonna steal, might as well do so from Zep, arguably the biggest thieves in the musical biz.

“Phoenix” is another piledriving stoner-rock classic; at one point it calms down to sound like Thin Lizzy (which gives you some idea of what passes for “calm” on a Wolfmother album). The disc wraps up by building a song around a Cream lyric snippet: “Violence of the Sun” is propelled by Wurlitzer and high-register bass guitar. It all ends in a wash of distortion. The fist-pumping track leaves the listener hoping it won’t be four years before the third disc.

Cosmic Egg safely avoids the dreaded sophomore slump curse; if anything it’s superior to its predecessor. Full of hooks but most definitely not a pop album, Cosmic Egg parties like it’s 1974. Soft-rock fans will want to steer well-clear of this bludgeoning, rife-with-riffs album. But fans of heavy, head-nodding rock won’t want to miss Cosmic Egg. Bring ear protection.