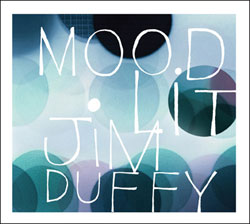 Pop-jazz. Jazz-pop. The labels are mere shorthand for a sort of music that’s tough to describe. The terms can often be applied in a pejorative sense, used to describe (and dismiss) disposable music. But that’s not at all what we have here. Mood Lit, the second album from Brooklyn pianist Jim Duffy, is a delight from start to finish.

The dozen tracks serve up sprightly melodies that swing. Duffy is aided and abetted by a small combo featuring The Smithereens‘ Dennis Diken on the trap kit, plus Paul Page on bass and Lance Doss on guitars (the latter two are also members of Ian Hunter‘s band). The lineup is the same as on Duffy’s first release, 2005’s Side One. On Mood Lit, Duffy drives strong, snappy compositions via acoustic piano or a Wurlitzer 200A.

There are some production flourishes — such as a vibes, horns and glockenspiel — but Mood Lit is an incredibly organic disc. The songs sound as if they’re being played right in your living room. The melodies are strong enough that vocals aren’t missed; on the contrary, the arrangements would suffer if anything else were added. Note-perfect arrangements throughout make Mood Lit that unique disc that’s perfect as a backdrop to cocktails and entertaining and highly engaging enough to reward careful listening. Musical touchstones lean in a jazz-for-all-the-people direction: hints of Brubeck, Bacharach and Guaraldi are there, and there’s even a subtle nod to the Ides of March‘s “Vehicle,” a 1970 Billboard pop hit. Another tune kicks off with an ambience that calls to mind Stevie Wonder‘s “You Are the Sunshine of My Life” but heads immediately in another (equally pleasing) direction.

Sometimes instrumental albums suffer from repetition or a dearth of ideas. Mood Lit finishes as strong as it starts, and doesn’t sag in the middle either. Pointing out a highlight would only do disservice to the other eleven tracks. Highly recommended.