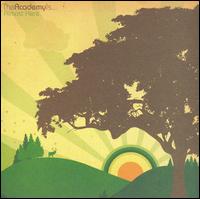 Hey, kids! Great news: Fall Out Boy has a new album out!

Okay, I kid. Really, I do. It’s actually Almost Here, the not-new album from The Academy Is… (I’m not getting ready to write something else here; the ellipsis is part of their name). Released in 2005, this album by the Chicago quintet (and Fall Out Boy labelmates) falls into the oft-used category of not-bad-if-you-like-this-sort-of-thing.

A sense of deja-vu pervades my listening experience. I thought I reviewed this album last issue, but then it was called Hedley. It’s a numbingly familiar mix of emo, punk and pop, the sort of genre populated with people who think punk started with Green Day. But then that’s what attendees of the Warped Tour expect. Can’t let the kids down, dude. Be sure to throw in the word “fucking” as an adjective at least once.

The group betrays the self-conscious attitude that you’d expect, with lyrics (on the track “Black Mamba”) like, “when they review the debut, what if the critics hate you?” Sounds like teen spirit to me. Sounds like some reviewer made these guys mad. I certainly hope my review doesn’t have the same effect, because they seem like a nice bunch of kids. Kind of like…Fall Out Boy.

This reviewer isn’t clear why the label (or PR flack) would have sent this disc for review, seeing as Santi, the followup disc was released in April of this year. A quick look online suggests that how one feels about Almost Here will be a good indicator of how you’ll like the new one. Consider yourself warned.