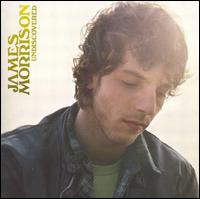 Beware, dear reader, any review that contains phrases such as “the best [fill in the blank: vocalist, guitarist etc.] since [fill in the blank: name of critically revered artist].” Too often, critics and music journalists fall victim to the hype. After all, we’re human too, despite what a subject of a critical drubbing might claim.

With that caveat safely out of the way, here goes: James Morrison is one of the greatest blue-eyed soul vocalists since Steve Winwood.

The vocalist’s publicity machine rightly touts his genuine street cred and dues-paying, and repeatedly drops the name Otis Redding. Yet Morrison’s smooth-yet-sandpapery voice bears more similarities in texture to a young Rod Stewart (circa Jeff Beck Group) and the aforementioned Winwood (circa Spencer Davis Group). And when he takes it up a notch (as he does on nearly each of Undiscovered’s eleven tracks), his voice bears an unnerving similarity to another Stevie, Mr. Wonder.

The arrangements are shockingly tasteful, not overblown; they couch Morrison’s voice with just the right sort of backing. Shades of Jerry Wexler’s work for Aretha Franklin there. On most tracks the vocals are merely a single-tracked Morrison; on a few he harmonizes pleasingly with himself. One track features a soulful female backing chorus. The last track, “The Last Goodbye,” shows Morrison in the way he must have sounded coming up: a lone vocal, a lone guitar. Sparse works for him too; it’s not difficult to imagine the rest of the album in an unplugged format. But let’s give thanks that Undiscovered (a wry title if there ever was one) has the gloss it does.