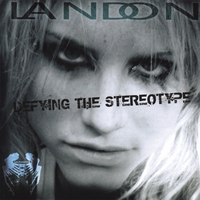 Despite its title, this album defies no stereotype. Landon is the equivalent to a combination of Pink, Amy Lee from Evanescence, and Jo Jo. Landon has a strong voice and can hit high notes, but this does not negate the unoriginality of this album. Remember when Britney Spears did “Stronger” on her album Oops, I Did it Again? She exemplified a force with this air that she was trying too hard, and her bubblegum roots were visible through the translucent façade. This album follows this empty structure with the addition of real musicians (whom, without doubt, give it much more credibility).

I’m all for girls in rock bands, but when done wrong, this ends up seeming like more of a fashion statement than a musical one. Musically, Landon is comparable to NIN. The entirety of Defying the Stereotype banks on the trendiness of the iconic uncontrollable and dysfunctional girl (you know, the same one we met in “Girl Anachronism” by the Dresden Dolls and “Milk” by Kings of Leon) . For me, the album was boring, if not irritating, to listen to.

To followers of bands with choppy guitar, rough-voice lyrics, and a tough feel to the music, this is probably the band for you. There’s nothing especially bad about Defying the Stereotype, but certainly don’t buy the album if you’re in the market for something new and refreshing.