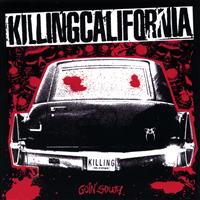 But let’s talk about the good stuff first. The playing is super-tight, and not in a dumbed-down sort of way, either. Echoes of Fugazi are evident in the work on Goin’ South. And the lead guitar work suggests that these lads soaked up some influences from 70s hard rock. The bass work is worthy of note: an isolated mix of Jason Richardson’s bass lines would be a reasonably entertaining listen.

Due to the disc’s running time — well under thirty minutes — one is tempted to call Goin’ South an EP. But there are ten songs, and each is developed in its own way. There’s enough variation in the riffage from song to song to keep it from being monochromatic.

Thanks to the inclusion of liner notes, I can report that the lyrics are thoughtful; with both hands on the wheel, Killing California avoids the twin ditches of (on the right) Christian preachiness and (on the left) political lecturing. Subject matter tends toward the personal/universal. Still, a disquieting bit of illiteracy does rear its head. Allowing for the all-lower-caps, mostly punctuation-free approach of the printed liner notes still doesn’t explain lyrics like “whiskey is the reason that your walking at my door” (“Dagger Practice”) or “johnny’s got the rythym” (“Black Collar Kids”).

The lyric sheet sets forth a red herring: for “Underground Girl” it reads, “no lyrics!!!!!” So I looked forward to a track that would spare me the screaming and concentrate instead on the powerful instrumentation. No dice. More screaming.