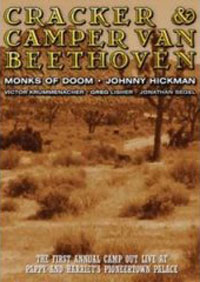 OK, here’s the thing: I like Cracker. And I really like Camper Van Beethoven. Camper’s genre-blending of Eastern ethnic sounds with, well, everything from C&W to punk to bluegrass was way ahead of its time. And while listening to them now, it’s hard to remember just how groundbreaking they were. But their music still holds up today.

So it was with some anticipation that I popped in the new live DVD, subtitled The First Annual Camp Out Live at Pappy and Harriet’s Pioneertown Palalce. The sepia-tinted cover promised performances by Cracker offshoots Monks of Doom, Jonanthan Segel and others. But what a snooze this DVD turned out to be. Shot on videotape, its multi-camera production is crushingly dull and unimaginative. And almost all of the footage is imbued with a monochromatic hue.

As are, sadly, the performances. None of these acts is renowned for its visual presentations, and hey, that’s fine. But during Camper’s set, one can see that videos are being projected behind the band. The producers of this DVD have unwisely chosen not to let us, the home viewers, get a good look at them.

The spinoff/related acts unwittingly make the case that they do best within the confines of one of the main groups. Ironically, the most interesting performance–the “Porchstock” footage–has the lowest video quality. It’s shot from a few feet away from the group, and people keep walking in front of the camera, headed off to hit the bathroom and/or grab another beer.

In the end, a set of (just-)good performances is marred by uninspiring videography. Recommended as an insomnia treatment.