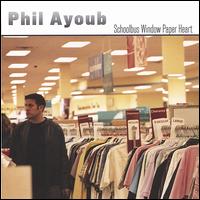 At musoscribe.com a lot of self-released CDs cross my reviews desk. That’s fine; with the new paradigm, plenty of worthy artists are bypassing the traditional channels, be they majors or indies, and putting the stuff out there themselves. Self-released albums have one advantage: the promo push can go on long enough to gain traction.

Which brings us to Schoolbus Window Paper Heart, the 2005 — yes, you read that right — release from Phil Ayoub.

The heartfelt, gimmick-free songs sport strong melodies. The disc opener “White Feather” gets things off to a pleasing start, and Ayoub’s quality control holds constant through the songs that follow. It’s quite easy to imagine someone driving down the open road with the windows open (or the top down), singing along, off key and at the top of their lungs, to the songs on Schoolbus Window Paper Heart.

Ayoub pushes that Americana imagery a bit too hard on “Scenes From an American Highway Rest Stop,” but with a title like that, you can’t say you weren’t warned. And while it’s a tired and overused ploy, do stay tuned for the hidden bonus track, “4th District Court of Bristol County.” It’s well worth the wait.

Overall, this is a solid effort that would, in a just world, get a wider hearing on a major label. But had that been the case, its product life cycle would be over, and I’d be reviewing something else.