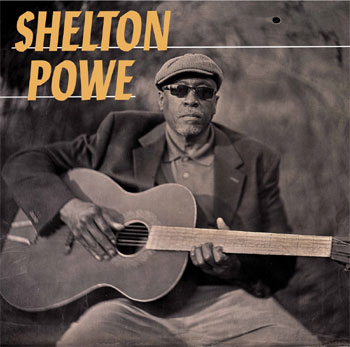 While Powe’s 2016 set featured a song list that touched on religious and devotional themes, on his third outing the guitarist-singer widens his scope. Songs about trains – Amtrak Train and Railroad Bill bookend the set, but in between, he sings about a variety of other topics.

The production is spare in the extreme. It’s just Powe’s voice and acoustic guitar; there are no effects – no reverb, no echo – nothing, really, other than the sounds he creates in real-time. Other than improved microphone technology, there’s absolutely nothing about the recording of Shelton Powe that sets it apart from Robert Johnson’s hotel room sessions in San Antonio, Texas in 1936. And that’s as it should be for an artist of his style.

The sonic quality of Powe’s guitar does offer a pleasing variety, though. His reading of Salt Peanuts features a tinny, droning resonator guitar; the one-chord tune is hypnotic. And there’s a disarming looseness to the performance that’s positively endearing.

The religious themes of the first album return with “Since I Laid My Burden Down.” Powe resists any inclination he might have to update or otherwise modernize the song; it sounds much the same as it would have many decades ago. “She Doesn’t Care About Me (But She Love that Cocaine)” is a good-natured treatment of love’s frustrations. Powe mines the subtlety of his vocal instrument with the contemplative “Give Me Two Wings”; the song features a bit of foot-stomping and quiet picking.

The all-instrumental One Dime Blues showcases the skill and finesse of Powe’s guitar work. “Shake ‘Em On Down” underscores Powe’s connection to his adopted home; it’s a tale of girl from Cabbagetown, one of Atlanta’s most historically significant neighborhoods. He sings in a near whisper, and that approach draws the listener deeper into the performance.

“Take a Walk in the Park” is almost jaunty; only Powe’s restrained approach to the song keeps it from turning into a sprightly, upbeat blues. His vocal line closely follows the guitar melody, creating a kind of duet feel. “Where Shall I Be” is very much in a gospel blues vein; the guitar’s sonority is heightened by Powe’s decision to play a lead line that explores the instrument’s lowest register.

The audio-verité quality of Powe’s self-titled album is such that one might expect him to break into a monologue – or extemporaneous chit-chat – between songs. But that doesn’t happen; the set focuses tightly on fourteen pieces of music. Whether the songs are traditional pieces arranged by the guitarist or original songs in that same style, there’s a consistency of approach that gives the album the feel of an intimate house concert with an audience of one: the listener.

Deeply rooted in tradition, Shelton Powe makes no concessions to modernity; it’s an authentic set of Piedmont blues performances that are as timeless as they are engaging.