Album Review: Demetria Taylor – Doin’ What I’m Supposed to Do 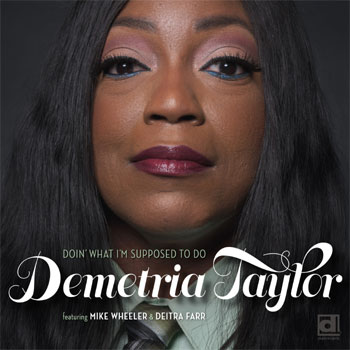 Singer Demetria Taylor grew up in a musical household. Her father was Eddie Taylor, rhythm guitarist for Jimmy Reed. Demetria launched her own career, winning the B.L.U.E.S. on Halstead Blues Diva contest in 2010. She released her debut album, Bad Girl, on Delmark in 2011. That record showcased Taylor’s expressive, gritty and soulful vocal style, and featured assured, spare backing by a crack instrumental ensemble. A highlight of the collection is its title track, an uptempo remake of her late father’s 1955 single, “Bad Boy.”

It would be more than a decade before Taylor returned with a follow-up, but Doin’ What I’m Supposed to Do vividly demonstrates that Taylor has developed as an artist in the intervening years. The straightforward Chicago blues flavor that informed Bad Girl remains at the heart of Taylor’s approach, but her the intensity and expressiveness of her voice has only deepened.

As showcased on the album’s opener, “83 Highway,” Taylor’s vocal range has expanded. She can still churn out the gutbucket roar, but there’s a newfound nuance in her delivery that makes the material even more satisfying. And the instrumental work is superb as well. “83 Highway” features some extended lead guitar work by Billy Flynn; his sinewy playing functions as a foil to Taylor’s singing; the result often takes the form of a vocal-guitar duet.

The ensemble demonstrates its versatility by shifting gears completely for the burning, propulsive “Baby Be Good.” Here Taylor completely abandons the gruff delivery style that characterized her earlier work in favor of a highly accessible dance/r&b approach. The song’s well-developed arrangement showcases Taylor’s vocal, but it still leaves plenty of space for the band to stretch out and dig in.

Vocalist Deitra Farr – recipient of the 2017 Koko Taylor Queen of the Blues Award – guests on vocals for “Blues Early This Morning.” Her husky pipes mesh wonderfully with Taylor’s voice on the tune, and the brief spoken back-and-forth between the two is a delight.

Though its title seems to reference Taylor’s spotlight number of a decade ago, “Bad Girl Day” is a song of a very different character. It’s a soulful, r&b flavored number, one that finds the singer expanding on the smooth side of her vocal approach. There’s a strong dance-oriented feel to “Welfare Blues,” with subtle yet insistent use of wah-wah guitar at its core. Brian James’ organ solo on the track is thrilling, and it leaves the listener wanting more. James turns to piano for another stellar solo on the kinetic “Nursing My Kitty Cat.”

The smoky “I’m Gonna Tell It” opens with some deliciously inviting lead guitar licks, and the band takes a minimalist approach, clearing the sonic landscape for Taylor to lay down another assured vocal. And while the approach is used sparingly on the album, Taylor’s double-tracked voice is a highlight of the record on its closing number “Young Gun Taylor.”

Crystalline production by Delmark’s Julia Miller and Elbio Barai helps keep the focus on the music, with nothing in the way of filigree or gimmickry. The sound of Doin’ What I’m Supposed to Do is an expert balancing of living, breathing audio document and gleaming, sophisticated studio production.

And speaking of that Koko Taylor award, Demetria Taylor is the well-deserved recipient of that honor for 2022.