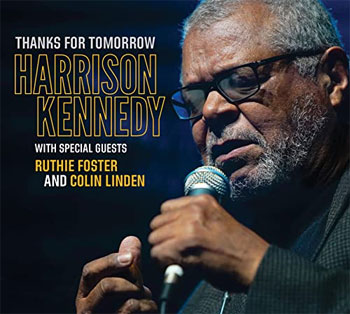 In 1967, the hit songwriting team of Holland-Dozier-Holland left Motown to launch their own record labels, Invictus and Hot Wax. The trio assembled a group to serve as a vehicle for their new compositions. That group, The Chairmen of the Board, would feature Detroit singers Eddie Custis and Danny Woods plus lead singer Harrison Kennedy, a native of Hamilton, Ontario. Kennedy fronted the group on its biggest hits, including “Give Me Just a Little More Time” and “Everything’s Tuesday,” but left the group for a solo career in 1974.

While Kennedy’s bona fides as a soul, funk and r&b singer were well established, his foundation was always rooted in the blues. That became clearer upon his signing in the 21st century with Toronto-based blues label Electro-Fi. His first release for the label, 2007’s High Country Blues showcased Kennedy’s style, a heartfelt synthesis of acoustic country blues. The album was nominated at Canada’s annual Juno Awards in the Best Blues Recording category.

Like its predecessor, Kennedy’s 2009 release One Dog Barkin’ was well received. Around the time of 2011’s Shame the Devil, Kennedy placed second in the solo/duo competition at the International Blues Challenge. Featuring slide guitarist Colin Linden, Kennedy’s 2014 release This is From Here finally scored him a Juno as well as other awards internationally.

Thanks for Tomorrow is Kennedy’s latest, and find Linden returning to add his slide guitar stylings to several tracks on the collection of 12 new songs, 11 of which are Kennedy originals. Koko Taylor Award winner Ruthie Foster joins Harrison for “All I Need is You,” the soulful blues duet that opens the album. While the arrangements feature the primarily acoustic foundation that characterizes much of Kennedy’s blues work, there’s cracking electricity in the performances.

There’s a sparking, spirited quality throughout the album, whether on playful tunes like the humorous and self-effacing “Easiest Thing,” the swaggering blues of “On Call Man” or the countrified lover’s ode, “Women.”

Kennedy effortlessly shifts styles between songs, serving up Louisiana-style blues on “Checkin’ You Out” and interpreting Van Morrison’s soulful balladry on “Crazy Love.” But the album’s variety is a strength, serving to showcase Kennedy’s mastery and command of the musical landscape.

Kennedy co-produced Thanks for Tomorrow with Jesse O’Brien, a multi-instrumentalist who also provides some of the record’s expressive yet subtle keyboard work. O’Brien shines most brightly on “Memphis Trippin’,” a hard-edged, smoldering blues in a Muddy Waters vein. That track also features one of Kennedy’s most impassioned vocal performances.

The mood lightens for the fun, uptempo “Cranky Woman.” “Doomed” is characterized in part by some evocative wordless vocalizing; the windswept number has a high lonesome feel, and Kennedy digs into the vocal line, moaning expressively throughout. “You Lost Me” is a Linden showcase, and features one of the most “electric” arrangements on Thanks for Tomorrow. The record concludes with the spirited jump blues of “Just Wanna Play,” a perfect and natural set-closer for a superb album.