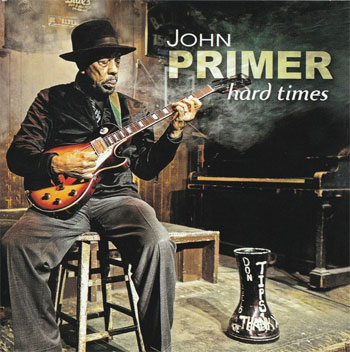 John Primer has an impressive pedigree; he’s worked as bandleader for Willie Dixon, Magic Slim, Muddy Waters and Junior Wells, which in and of itself is enough to warrant further investigation of his artistry. As a solo artist, he founded the Real Deal Blues Band in Chicago in the mid ‘90s; he has released a great volume of material.

About seven years ago he was part of an all-star musical cast paying tribute to Muddy Waters; his guitar work is featured on Muddy Waters 100, a document of that project. In recent years he has collaborated on several recordings with blues harpist Bob Corritore; 2020’s The Gypsy Woman Told Me is a highlight of that creative pairing. He’s also on a must-0hear album released last year, Johnny Iguana’s Chicago Spectacular!

And Iguana – who’s also on that Muddy tribute – returns the favor on Hard Times, the latest release from John Primer. But the core of the music is Primer’s Real Deal Blues Band, and the star is guitairst Primer himself. Across 13 songs – all original, something of a rarity in the world of blues releases – Primer e,bodies the soul and spirit of Chicago blues. Me moves I na variety of style; while “Don’t Wait too Long” is standard uptown blues, there’s a Howlin’ Wolf vibe to the title track.

Primer rarely ventures outside the blues idiom, and there’s no need for him to do so. He takes it low and slow on “Blues Blues Blues,” and if the lyrical content doesn’t offer up anything new, it provides a vehicle for some searing slide work. And that’s enough.

There’s an upbeat, positive character to songs like “I Won’t Sweat It,” and Iguana’s spirited piano adds just the right element to an already tasty tune. The loping “All Alone” is a highlight as well. Daughter Aliya Primer guests on vocals for “Tough Times,” and makes it plain that talent runs in the family. Steve Bell’s harmonica work on the track is deeply soulful.

Lyrically, Primer concerns himself with workaday topics, the kind of things with which listeners can surely relate: “Hot Meal, “Whiskey” … you get the idea. It’s meat and potatoes Chicago blues, played with passion, grit and the skill that comes from years of honing one’s craft.