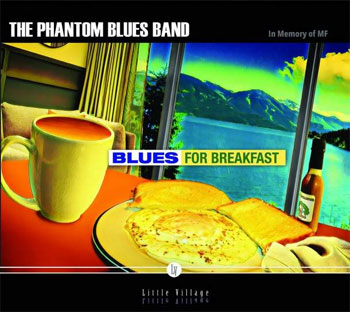 Being associated with Taj Mahal is a guarantor of quality. And the Phantom Blues Band developed their reputation backing the venerated blues/world music giant before setting out on their own with 2006’s Out of the Shadows. Four albums and 16 years later, the six-man outfit still delivers.

For all its virtues, even the wide-encompassing blues idiom is too narrow a style to contain the musical variety of the Phantom Blues Band. With a musical demeanor and worldview that places them in a similar category as NRBQ, the group makes a uniquely American music that needn’t be labeled.

There are blues textures, to be sure – check out the Bobby Blandishments of “Laughin’ and Clownin’” for proof – but there’s funk, jazz, Big Easy-flavored r&b (“She’s Into Something”), reggae (“Move On Up”), jump blues (“I Know You Don’t Love Me”), swinging c&w (“Country Boy”), and lots and lots (and lots) of soul. Bonnie Raitt even stops by to lend her vocals to a duet.

If many of the songs on Blues for Breakfast sound familiar, that’s because they are. The group digs into a kind of alternate Great American Songbook, imbuing the tracks with their inimitable character while staying true to the vibe of the originals.

Sadly, founding member and keyboardist Mike Finnigan succumbed to cancer during the making of the album; he appears on but one track, “OK, I Admit It.” His keyboard duties are ably taken up on the remainder of the album by another highly admired musician, Jim Pugh. The album is dedicated to Finnigan, and proceeds benefit a music scholarship in his name.