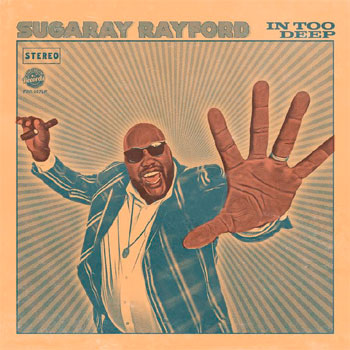 With a brand of blues that draws from the soulful r&b end of the spectrum, In Too Deep follows on from the creatively successful direction Rayford established on his third solo album, 2015’s Southside. Augmenting a core guitar/bass/keys/drums lineup with a tight and hard-charging horn section, in places In Too Deep also employs instrumentation more readily associated with big bands and orchestras: flute, flugelhorn, violin and cello.

The album opens on a strong note with “Invisible Soldier,” a tune that weds a thoughtful, topical lyric to a kinetic and powerful arrangement that combines the best of blues and Memphis-style soul. The stomping title track balances a moody, sinister character with a hypnotic cyclical riff that moves the track along. “No Limit to My Love” takes things is a very different: it’s a sweet r&b slow jam of the first order.

“Under the Crescent Moon” is cinematic in its scope, with a lyric that draws the listener in from the very first line. Tasteful horns and subtle keyboard work add to the song’s assets. The thrilling “Miss Information” has a Dap-Kings feel. Eamond Ryland’s assured wah-wah guitar and Monette Marino Keta’s hand percussion give the track a vibe reminiscent of the best early ‘70s funky soul.

Underscoring the extent to which In Too Deep emphasizes Rayford’s facility in a wide array of styles, “Please Take My Hand” is suffused with elements of gospel. The chanting background vocals and hand claps evoke mental images of a Sunday service. Other than occasional taps on a cowbell, “Please Take My Hand” features only those claps, foot stomps and wordless chanting in support of Rayford’s impassioned lead vocal.

“One” echoes Bobby Womack, with a stirring string section adding to both the sophistication and emotional content of the song. “Gonna Lift You Up” is as ebullient as its title suggests, with a delightfully busy Taras Prodaniuk bass line, punchy brass and a nearly subliminal rhythm guitar that nonetheless helps define the song’s character. Rick Holmstrom – best known as Mavis Staples’ band leader – adds a sinewy lead guitar solo.

Things get sultry and smooth on “Golden Lady of the Canyon,” a romantic number almost certainly written to express Rayford’s enduring love for his wife. But In Too Deep ends as it began, with a funky, upbeat and energetic cut: “United We Stand” is a statement of optimism that points the way toward Rayford’s future.

Rayford is musically up top, out front and in command throughout In Too Deep. But praise for the album’s undeniable should also be directed toward Forty Below Records founder Eric Corne. His role in the making of In Too Deep is expansive: Corne produced, engineered and mixed the album. He also wrote eight of the album’s ten tracks (the other two are co-writes with Rayford).

But In Too Deep remains Rayford’s showcase. The lyrics and music are all in service of his formidable talents as a vocalist. His enthusiasm and energy are matched by his skill at getting across the emotional content of his material.