A Conversation With Corey Harris

(An edited version of this Q&A was published in Living Blues. ) 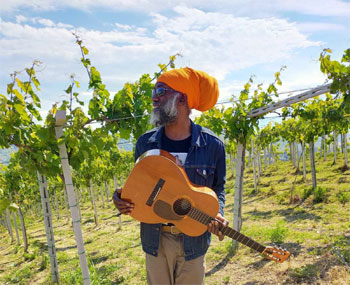 Corey Harris has a well-earned reputation as an authentic modern-day practitioner of Delta blues in its acoustic form. He’s also an incisive observer of contemporary society, and his body of work reflects those twin strengths. His latest release, Insurrection Blues, focuses on today’s challenges, and was made while the pandemic forced Harris to sequester in a small Italian village (Atri, population 13,000).

Tell me about the circumstances surrounding your being stranded in Italy.

I was only planning to be there for a few months, really. I found out that the booking agents I was working with over there didn’t have honest business practices, so I severed my relationship with that company. That left me in a position where I was having to get work myself. Then Covid hit in the midst of that, and that just really shut it all down.

Atri is in Abruzzo, on the Adriatic Sea about 2.5 hours east of Rome. Lockdown didn’t affect us too much because Atri is very small. We could walk around the town, but as far as leaving and getting on the main road, it was tightly controlled for a while. It was beautiful, but I definitely didn’t want to be there that long. It’s a nice place to visit…

How did being locked down in Italy inform your songwriting and creative process?

Lockdown forces a person to look inward. You can’t go outside, and if you do go outside, there’s nothing going on anyway. So it made me play with attention toward volume and dynamics. Not playing electric for two years – just playing acoustic in a really small house in a really small town – made me center myself in the music a lot more and focus more on the fundamentals, on the basics.

How did the process of recording differ from your established way of working?

It was a lot simpler in that, you know, I didn’t have a [big] record company that I had to deal with. Bloos Records is a one-person record company. So it was easy to deal with this one person, Simone Scifoni. He was living in Rome , and he was able to come with a very small board and some mics. I had a little studio that I had borrowed from a friend nearby, and Simone just set up and recorded everything.

For the two tracks that we had accompanists – Phil Wiggins on the harmonica and Lino Muoio on the mandolin – they dubbed their parts. Lena was in Rome and Phil was in D.C. I felt like I had already been practicing for a couple years, so as far as the actual recording, it went pretty smoothly. I recorded it all in two days in May of this year.

Insurrection Blues is a topical record. What do you see as your responsibility as an artist in that regard?

So, that is my responsibility: to be rooted in the past, because that’s what gives me my language and my life force but, at the same time, I’ve got to use that to make a statement about what’s going on around me. I feel like an artist is supposed to communicate the way he or she sees things. Art has a vital place because it lets us imagine new possibilities, lets us be inspired and gives us a new pathway. It shows us a new way of being, and it’s up to us if we want to take it.

Did you approach Insurrection Blues as a thematically unified collection of songs, or did the nature of the album reveal itself to you as you worked on it?

It was a thematically unified idea. I wanted to make a statement about the United States right now in the moment, then sonically show all the information that came before that. I also wanted to show Black people’s continual presence as a foundation in this country.

With the song Insurrection Blues, I wanted to depict in song the sounds of the people – the African captives who were brought over – who built the White House, who built the monuments. It’s quite ironic that these are viewed as symbols of liberty, yet how were they constructed?

People were rightfully terrified, horrified, shocked at the January 6 insurrection, but this is nothing new. This is in the DNA of mainstream America to do these sorts of things; there’s a lot of historical precedent. But people were like, “Oh, this is not who we are!” But it is, you know? Let’s grapple with who we are. It’s like the wife beater, you know? He beats his wife and then he cries, “Oh, I’m not really like that!”

If you do want to move out of a bad place, then you’ve got to realize, “Okay, I’m in a bad place. How did I get here?” But if people are pissing on you and telling you it’s raining then, you know, you can’t take that.

Against the backdrop of things like the January 6 insurrection, how do you personally maintain optimism and joy?

I try to stay connected and be aware of the history. I take comfort in the strength of those who were able to persevere through such difficult history. The struggles that I’m facing – the struggles that we are all facing – they’re difficult, but we’ve been through worse. I’m speaking about Black people specifically, but we can also take this to mean America in general as well. Whatever doesn’t kill you makes you stronger. So there’s an opportunity for those who have been made strong to display their strength in this time.