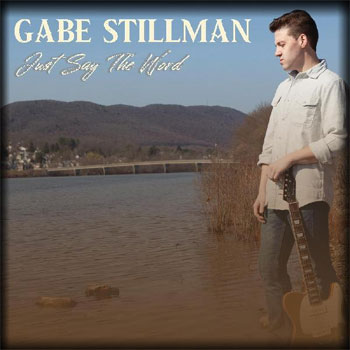 From the roaring slide guitar figure that opens “Give Me Some Time,” on Gabe Stillman’s new Just Say the Word, it’s clear that this youthful musician from Pennsylvania is steeped in the blues.

Stillman’s 2020 release, Flying High was a collaborative effort that featured the guitarist backed by renowned heartland blues outfit The Nighthawks. It was an effective paring that reflected well upon all involved. As fine a collection of performances as Flying High was, on Just Say the Word, Stillman truly comes into his own. His artistry and command of the guitar is front and center.

The new album doesn’t represent Stillman’s first crack at recording “Give Me Some Time.” That original tune was the opening track on a five-song EP from 2018, The Grind. That release was an effective calling card, a method of letting the world know that this Berklee-trained guitarist had plenty to offer. Two other tracks on Just Say the Word are new versions of songs from The Grind as well. But these new recordings are anything but retreads; the stinging lead guitar work, sparkling production values and spirited backing prove that their inclusion on the new record is a wise move.

Horn sections aren’t generally thought of as subtle; that’s not their typical role. But the crack ensemble work of the Texas Horns on “Let it Go” adds to the excitement of the arrangement without overwhelming it. Even as the horns punctuate the phrases with soulful, Stax-flavored breaks, Stillman’s guitar and expressive vocals remain the focal point. And the musical dialogue between his leads and the brass on “Let it Go” is reminiscent of Duane Allman’s similar interplay on Boz Scaggs’ bravura “Loan Me a Dime.”

On “No Time for Me,” Stillman’s vocals are overdriven just a bit – not unlike the manner in which a classic Green Bullet mic distorts a blues harmonica – and that texture matches up nicely with the growl of his guitar. Here as throughout the album, Stillman’s lead guitar breaks are long, but they never overstay their welcome; in fact they leave the listener hungry for more.

Stillman takes a careful step toward topicality with “No Peace for a Soldier,” but his original lyrics tell a relatable story without getting preachy or jingoistic. Still, many listeners will have come for the guitar work, and the tune – with more thrilling Texas Horns work – does not disappoint.

The album’s title track is boot-scootin’ dance blues, with a swinging beat and an appealing retro feel. And the rural-meets-sleek vibe of “Alabama Wildflowers,” a road musician’s paean to home, proves that Stillman can dial down the intensity and still deliver a song that’s lyrically and musically resonant.
A centerpiece of Just Say the Word is the simmering “Heartbreak Makes a Sound.” Featuring a wonderfully minimalist arrangement, the song is built around Stillman’s voice, some tinkling electric piano and some deeply romantic tenor saxophone.

The chugging “No Matter What You Wear” is a rousing guitar extravaganza, featuring Funderburgh and Foley (the latter adding backing vocals as well) layering their artistry into the mix. But those veteran artists’ contributions support Stillman’s vision, never overshadowing it. Blues harpist Greg Izor joins in on the fun for “Susquehanna 66,” providing an incendiary performance for the spirited instrumental in a jump blues style. His sparring with Stillman is breathtaking.

There’s no production artifice about Just Say the Word; it’s professional without being over-polished, gritty without a note out of place. It’s a fully-realized effort that sharply points the way toward a bright future for Gabe Stillman.