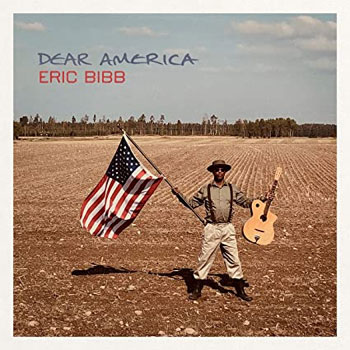 Born, raised and immersed in the musical culture of New York City, these days guitarist-songwriter Eric Bibb is better described as a world citizen. He moved to Europe at the end of the 1960s, and has variously made Paris, Stockholm and London his home since then. But his innate American-ness remains a defining characteristic of his music. The folk influence – and social conscience – of Pete Seeger, Bob Dylan and Paul Robeson (Bibb’s godfather) – have all found a place in Bibb’s music.

And his glob-encompassing worldview has informed his music from the very start; his second release, 1977’s Rainbow People opens with a sweet, folky tune, Catalina Estimada, that draws as much from the James Taylor school of songwriting and arrangement as it does from what would come to be known as world music.

Jazz has always bee in the mix for Bibb, too; The Modern Jazz Quartet’s John Lewis was his uncle. But jazz and other styles sometimes shown up in Bibb’s blues in subtle ways. Yet on Dear America’s opening track, “Whole Lotta Lovin’,” Bibb goes so far as to name-check a few of his influences: jazz, blues, calypso, rock ‘n’ roll and gospel. The song’s spare arrangement features Bibb’s gentle acoustic picking is supported only by jazz legend Ron Carter on upright bass plus a few splashes of well-placed vocal harmonies. And nothing more is needed.

Vocalist Shaneeka Simon guests on “Born of a Woman,” trading vocalist licks with Bibb; the tune also features some evocative electric and acoustic slide guitar work. The song starts with an arrangement nearly as spare as the first cut, but by its end it resembles a sort of rocking, electric field holler.

Guest turns are a prominent feature of Dear America. “Whole World’s Got the Blues” features Eric Gales; his snaky lead flit in and out of the mix, the understated song seethes and simmers. The guest-less “Dear America” delivers on the social commentary suggested in its title. It, too, bears the influence of field hollers, with percussive foot stomps and hand claps among its most prominent components.

Ron Carter returns for perhaps the most topical song on an album dominated by weighty subject matter: “Emmett’s Ghost” is a contemplative, melancholy number with more beautiful picking; though it features some extremely subtle string work placed deep in the mix, it’s very much a piece with “Whole Lotta Lovin’. “

An impassioned message song, “White & Black” features a full-band arrangement and a stirring, wordless vocal chorus. Billy Branch helps out on the first of a two-part number, “Talkin’ ‘Bout a Train.” Bibb’s focus on topical lyrics takes a momentary back seat here. The funky and hypnotic second part of the track sounds wholly unlike anything else on Dear America, and suggests an interesting direction Bibb might do well to explore in the future.

And the soulful, breezy “Love’s Kingdom” (featuring Tommy Sims and Glen Scott) places Bibb’s many talents firmly into the pop idiom. The album concludes with a sweet love song duet featuring Bibb and Lisa Mills, with a delicate arrangement that includes piano and cello. A model of strength through subtlety, Dear America rewards repeated listening.