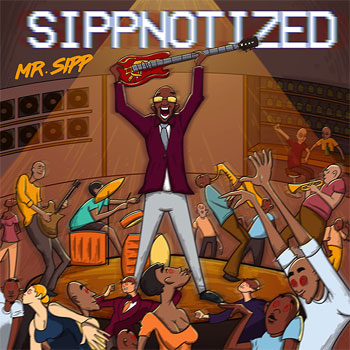 Mr. Sipp is the nom de blues of Castro Coleman. The 2014 International Blues Challenge winner is also known as “The Missisippi Blues Child.” Sippnotized is the fourth long-player from the acclaimed gospel-blues guitarist-singer.

Across the new album’s ten songs, Sipp synthesizes his influences into a cohesive whole. “Gonna Be Alright” wouldn’t be out of place on any of Sly and the Family Stone’s classic-era albums, but Sipp manages the feat of engaging in pastiche while never losing his own musical personality in the process.

“Free” is an outlier; with its dated guitar and synthesizer textures (and funk-popping bass figures), it sounds like an ‘80s funk slow jam. It’s effective at capturing that particular vibe, though it remains an open question whether there’s much demand for such a musical excursion. The gospel vocal arrangement that dominates the song’s second half does redeem things, but it still feels underwritten and derivative.

Sipp gets back on track with “F 2020.” The letter stands for exactly what you think it does; the tune is a survey of the challenges faced in the first year of the pandemic. But while Sipp doesn’t shy away from enumerating the negatives – “that was a terrible year,” he sings – his outlook for the future is hopeful. Beyond the lyrics, the tune gives Sipp room to stretch out and deliver an extended guitar solo.

“The Mississippi Step” reaches back to music’s past for its theme: creating a new dance. Electronic hand claps and some engaging synthesizer splashes create a musical throwback that’s undeniably fun. Running his guitar through a phase shifter allows Sipp to give “Can You Feel Me Now” a psychedelic blues character. The tune’s deep-groove melody is among the best on the record. And even though Sipp is in preaching mode, his good-natured approach isn’t likely to alienate less spiritually-inclined listeners.

If only to underscore Sipp’s stylistic range, “Fallen Loved Ones” would be a success. A late-night blues weeper, it features some lean, jazzy guitar work and deeply soulful, heartfelt vocals. And responding to what he characterizes as his fans’ desire for some “lowdown blues” with “Dirty Mississippi Blues” he turns in a I-IV-V number that delivers on that promise. And right before he tears into a stinging solo, he name-checks his previous album, 2017’s Living Blues Award winner Knock a Hole In It.

Mr. Sipp unplugs for the set closer, “The One.” After an extended spoken introduction, Sipp delivers an autobiographical lyric. He expresses his desire to bring smiles and joy to his listeners; more than anything, “The One” sounds and feels like a love song. But it’s one directed not to an individual, but to those who some might call fans. Yet as Mr. Sipp explains in the song, he thinks of them as family.