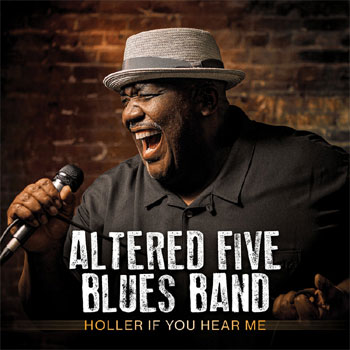 Jeff Taylor has a big voice. In the tradition of the great blues shouters, Taylor is a commanding presence. But he’s merely one of five ingredients in the recipe that is the Altered Five Blues Band. From the rollicking and rock-steady bass work of Mark Solveson to the fleet-fingered keyboards of Raymond Tevich to Jeff Schroedl’s delightfully varied guitar to Alan Arber’s commanding drumming, the band is firing on all cylinders throughout Holler if You Hear Me.

The band explores tonal color primarily though Schroedl’s choice of guitar sounds and Tevich’s keys (electric and acoustic piano, organ). They do a lot with a minimum of fuss. And guest Jason Ricci adds bright and soulful harmonica to five of the album’s 13 cuts.

One handy indicator that this outfit is confident is the track list: every single one of the tunes is a group original. Guitarist Schroedl is the primary composer, but on cuts like “Guilty of a Good Time,” all five musicians get in on the composing. And the group’s collective sense of humor is showcased on “If You Go Away (She Might Come Back)”; the lyric doubles down on a familiar blues trope, but does it in a way that’s somehow fresh. And Taylor’s hearty laugh as the song ends lets the listener know that it’s all in fun.

That cocky and lighthearted perspective informs the supercharged blues rocker “Full Moon, Half Crazy” and the swinging storytelling “Where’s My Money?” as well. “All Suit, No Soul” pokes fun at wealthy poseurs, with a melody that recalls Junior Wells’ “Messin’ with the Kid.”

More serious is “Holding on with One Hand,” a gospel-blues tune that give Schroedl and Tevich more opportunities to shine. The band takes things in an Albert King direction for “Clear Conscience, Bad Memory.” The swaggering “In the Name of No Good” features some nice gurgling organ washes and an insistent, metallic snare drum sound from Arber. Listen closely for some especially tasty bass work on that cut, too.

“Fifteen Minutes of Blame” takes the music to the edges of the group’s style. The central sonic component is Tevich’s clavinet, run though a wah-wah pedal. The instrument takes on some of the character of a guitar, but because its tone is so different from that of Schroedl’s axe, the two instruments spar throughout the tune. The result is four of the most exciting minutes on Holler if You Hear Me. The record closes with a dance floor number; as its title suggests, “Big Shout Out” name-checks a long list of blues heroes who have inspired the band and countless others.

Holler if You Hear Me is the Milwaukee-based quintet’s sixth album; previous releases have won awards from the International Blues Challenge, Independent Music Awards, Wisconsin Music Awards and from Guitar World magazine. The band was nominated for a Blues Music Award in 2018. And there’s every reason to think that Holler if you Hear Me is in line for similar accolades.