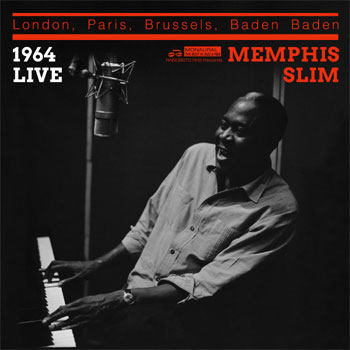 As Ray Templeton reminds us in his liner notes for this newly-issued archival release, “When Memphis Slim first visited Europe in 1960, he was already a twenty year veteran recording artist.” His first charting single was in 1948 with “Messin’ Around”; it reached the #1 spot on the r&b chart of the day. Slim’s album era wouldn’t being until 1959, but once he started, he was staggeringly prolific. By the end of 1962 – less than four years after the release of Memphis Slim at the Gate of Horn – he had released no less than 19 long players under his own name or with other artists like Pete Seeger, Willie Dixon and Sonny Boy Williamson.

Like many blues and jazz artists before and since, the songwriter and pianist born John Chatman was embraced by European audiences, and by ‘62 he had permanently relocated to Paris; he would remain there until his passing in 1988. And in 1964 he toured widely on the Continent and in the U.K. Many of those performances were professionally recorded, and a well-chosen set of 17 songs from live engagements forms 1964 Live.

It’s a testament to the creative outpouring of Memphis Slim’s career than only one or two songs from his 1959 debut LP are included in these 1964 recordings; the man was never for want of new material. But as fine as his albums were, his highly lyrical piano playing and engaging manner were clearly best experienced live.

The four shows from which 1964 Live draws find Memphis Slim joined by different sidemen. Eight of the disc’s tracks are from a May performance at the London BBC Jazz Club; in superb fidelity, that set features sidemen Pete Blannin and Eddie Taylor. Matt “Guitar” Murphy and Billy Stepney backed the pianist for a date in Brussels (February 2), and six songs from that set are included; they’re presented in excellent audio quality as well. And Slim shares the spotlight with Murphy on the latter’s signature tune, Matt’s Guitar Boogie, a highlight of this collection.

Even most of the stray tracks that round out the set – one each from shows in Paris, Brussels and Baden Baden, all featuring Murphy and Stepney – are of perfectly acceptable fidelity. The disc concludes with a recording from the October 1962 Jazz Unlimited show in Manchester; that track was issued a few months ago as part of the American Folk Blues Festival Live in Manchester 1962 set, also from Rhythm & Blues Records. That performance is notable for its lineup: Willie Dixon on bass and Jump Jackson on drums.

The informative liner notes for Live 1964 note that the BBC set is a radio broadcast, but there’s no mention of the provenance of the other recordings. It’s likely that they’re off-air recordings of radio broadcasts as well.