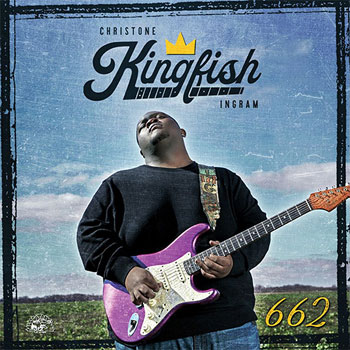 More than a century and a half after it began, and some 85 years after Robert Johnson recorded two-dozen plus songs, the blues is in good hands. While a few of the blues’ leading light – like Bobby Rush and Buddy Guy – -are still treading the boards, younger artists are showing that the blues idiom is nowhere near played out. That’s brilliantly clear on 662, the new album from Christone “Kingfish” Ingram.

The Clarksdale, Mississippi native burst onto the scene as part of a youth ensemble’s 2014 performance at the White House for First Lady Michele Obama. Dates on Tiny Desk Concerts and other prominent spots followed soon enough, and his debut album, Kingfish was released in 2019. That record was greeted with enthusiasm by critics and listeners alike, winning a number of polls and a Blues Music Award for Album of the Year.

Against that backdrop, Ingram had built up plenty of momentum. But the so-called sophomore slump is a real thing, not simply the invention of music journalists eager to take upstarts down a peg or three. But the sophomore slump concept is one with which Ingram seems wholly unfamiliar. 662 bursts out of the gate with fire and fury, and the record never lets up. Kingfish is a commanding presence on lead guitar and vocal; there’s simply nothing about the record that betrays it as the product of a man who has yet to celebrate his 23rd birthday.

Songs like “Long Distance Woman” have the power, vitality and gravitas of the best early ‘70s heavy rock, but Ingram is completely at home within the blues; though his music sure as hell rocks, it’s not rock. The smoky arrangement and topical lyrics of “Another Life Goes By” shows that he can dial the intensity down, playing and singing with subtlety and grace; the results are fiery in their own way. Toward the song’s outro, he slips in a few phrases that evoke memories of Wes Montgomery.

Though he works with experienced co-writers like producer (and multiple Grammy winner) Tom Hambridge, Ingram clearly has a significant role in crafting the material that appears on his new record. The lyrics of “I’m Not Gonna Lie” demonstrate a high degree of self-awareness, and the song’s arrangement is the kind of blues that Led Zeppelin used to play.

Ingram has an impressively deep well of guitar tones and textures, and he’s expertly backed throughout the record. Whether it’s the jazzy “You’re Already Gone” or the wide-open stomp of “My Bad,” with 662, Christone “Kingfish” Ingram makes it clear that he’s just getting started. And with an auspicious second album like this, it’s a breathtaking proposition to contemplate where the future might take this young leading light of the blues.