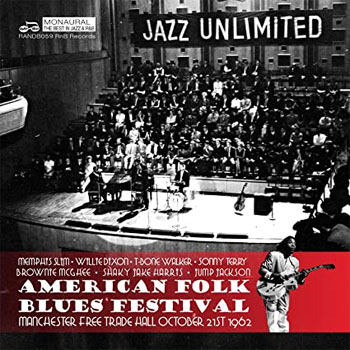 Owing to a fascinating and complicated set of circumstances, for many years American musicians of color were recognized and celebrated more in the UK and Europe than they were at home. This was the case for quite a few jazz and blues artists; revered overseas, some made the transatlantic trek to appear in front of rapturously appreciative audiences.

So it was in 1962 in Manchester, England. Situated some 200 miles northwest of London and with a population of nearly a quarter million, Manchester enthusiastically hosted the inaugural American Folk Blues Festival in 1962. Conceived by German journalist Joachim-Ernst Berendt, the traveling event visited Germany, Switzerland, Austria and France; a pair of shows on October 21 at Manchester’s Free Trade Hall marked the end of the tour.

The performances were captured for British television, broadcast as Jazz Unlimited one year after the concerts. The monaural audio from those recordings is surprisingly sharp. After a radio announcer’s introduction, Terry & McGhee present acoustic guitar and harmonica readings of popular and traditional folk blues numbers (“Kansas City Blues,” “I’m Leaving in the Morning,” the vocal harmony showcase “I’m a Poor Man But a Good Man” and “Easy Rider”) to a wildly ecstatic audience.

Backed by a full band including piano, Memphis Slim delivers a soulful reading of Big Bill Broonzy’s “Just a Dream.” Bassist “Wee” Willie Dixon – the point man who helped organizers line up the impressive bill of artists – is featured on his first appearance in front of a British audience, singing and playing a co-write with Memphis Slim, “Sittin’ and Cryin’ the Blues.”

Fronting a small combo, fiery guitarist T-Bone Walker wraps up the set with three tunes: “Call it Stormy Monday,” “My Baby (Is Now on My Mind)” and – joined by all of the artists on the bill – “Bye Bye Baby.” Up to this point, the audience held its reaction until the end of each number; here they clap along and roar in appreciation throughout the brief number.

It’s difficult to emphasize just how important the Manchester shows would turn out to be. In the audience were Keith Richards, Mick Jagger and Brian Jones; the Londoners had played their first gig as the Rolling Stones a mere three months earlier. Young session guitarist Jimmy Page – later of the Yardbirds and Led Zeppelin – was also at the Manchester festival.

American Folk Blues Festival Live in Manchester 1962 would be worth acquiring if only for the music contained therein, but this new package offers more. The CD package includes a 24-page booklet filled with superb black-and-white photos of the event, memorabilia, newspaper clippings and a contemporary review in Jazz Monthly by G.E. Lambert.